To Paris: From New York with love, empathy and art

U.S. city scarred by terror clings to creativity and beauty alongside Paris. 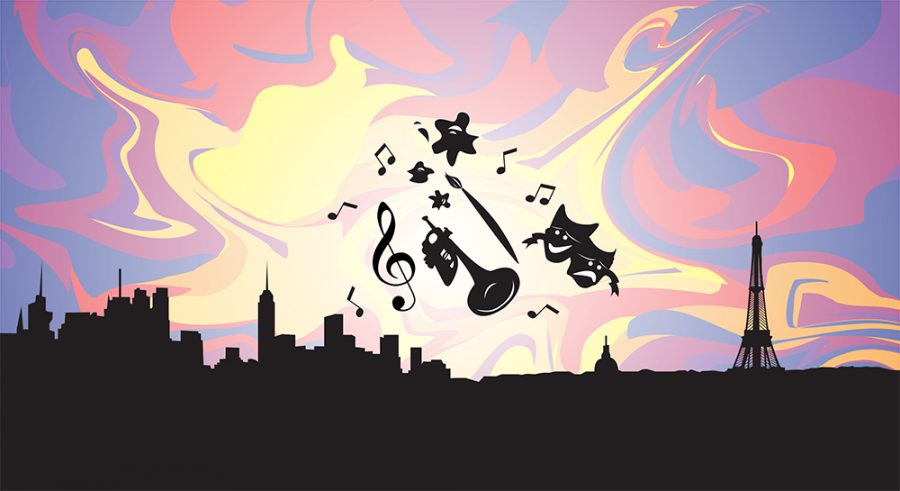 To be moved by music: I thought of that intention as I landed on United flight 1752 in New York City on Nov. 12, 2015. I took a walk after settling in the hotel. Lights from Times Square glowed strong in front of me.

The heart of the city pumped art and culture.

On Friday evening, Nov. 13, I sat in a theater at Manhattan School of Music. Parisians on the other side of the world gathered in Le Bataclan theater.

At the School of Music, alumna Jane Monheit sang jazz standards in the style of Frank Sinatra to celebrate his centennial. The incredible MSM Jazz Orchestra swang hard, conducted with captivating synchronization by their charming leader, Justin DiCiocco. The simplicity of the lyrics and iconic arrangements drew tears from my eyes and the ache in my chest felt like love. I looked at the faces of those in the audience — their visages reflected the same fullness of heart.
HEARTBREAKING EMPATHY
After the concert, I sat at a booth in Lindy’s and ordered a slice of cheesecake.

A Twitter alert informed me that several locations in Paris, including a theater, had been attacked by terrorists; at that point, over 100 were confirmed dead.

Looking through the window, the lights of the city still glowed and I began to feel heartbreaking empathy exude from the city’s center.

On Saturday afternoon, seas of people on the Manhattan streets emanated palpable uneasiness. With hundreds, I moved through police blockades into the Marquis Theater for the matinee performance of “On Your Feet!”.

“In the years I have been doing tours to New York, I have never seen so much police,” the woman sitting next to me in the crowded theater shared her experience as a Manhattan tour bus organizer. “Not even right after 9/11. I’ve never seen so many armed guards.” She was verbalizing what I could tell many were thinking.

RESONATE WITH THE TENSION

In a crowded theater again, I could not help but resonate with the tension around me.

Lights began to dance around the stage. Trumpets sang boldly. Bongos trilled, filling the air with a new atmosphere. The curtain lifted,  and as I witnessed the passion unavoidably emitting from the actors and dancers, tears flooded my eyes again. Their movement, their voices and self-offering were powerfully connecting the hearts in each seat together through a captivating blanket of emotion.

The streets filled quickly as the busy Broadway theaters exhaled crowds of people through their doors. Moving through the crowd I saw police with guns slung over their shoulders standing protectively in a line. People whispered about the emergency vehicles in the streets and looked around nervously at the crowds.

My Saturday ended at Blue Note Jazz Club in the Village. Stanley Clarke started walking his fingers over the neck of the bass: just a 12-bar blues to allow 76-year-old McCoy Tyner do whatever he wanted on the piano. And like the sound of an expected friend, Tyner started faintly tapping the keys. A love mess of jazz ensued and ended all too early.

Christian Davis wrote an article for the Chimes about grief and the importance of using music in the face of violence. The concepts he explained aligned with the sentiments I felt in New York during the weekend of Nov. 13.

Le Petit Journal, a news program in France, opened their show on Nov. 16 with the Parisian motto: “Fluctuant nec mergitur,” meaning, “tossed but not sunk.”

“For the past three days across the globe, we have seen Paris in darkness, with corpses on the sidewalks, explosions on every street corner,” said host Yann Barthès in his introduction. “Regardless, we’ll keep listening to music at the Bataclan and having drinks on terraces…Paris and France will remain magnificent.”

The host continues, explaining that the act of terrorism in Paris on Nov. 13 was aimed at art and music as well. The program sent a video team to the streets of the mourning city and gathered the thoughts of the people.

“Being outside is proof that Paris does not stop. Paris lives,” said one man being interviewed by Le Petit Journal.

WE HAVE FLOWERS
During the Russian-Ukraine conflict earlier this year, the same idea came through in an article by Rick LymaI felt moved by in the New York Times. It was about the citizens of Donetsk, Ukraine keeping the opera and other places of art and culture open, despite the constant shelling and destruction of their community. The opera advertising director Andrey Kornienko tells of the rule and responsibility of the theater to continue supporting the people emotionally through art — even during war.

While in New York during the Paris tragedy, I had not only been moved by music, but also by the hurting heart of the city. It clearly throbbed alongside Paris: the French center was living the horror suffered by the United States in New York City over 14 years earlier.

An interview during Le Petit Journal’s coverage encapsulates the human pattern of reaching for art and beauty. In the show, a Parisian father explains to his young son the importance of clinging to art and beauty in times of war and trial.