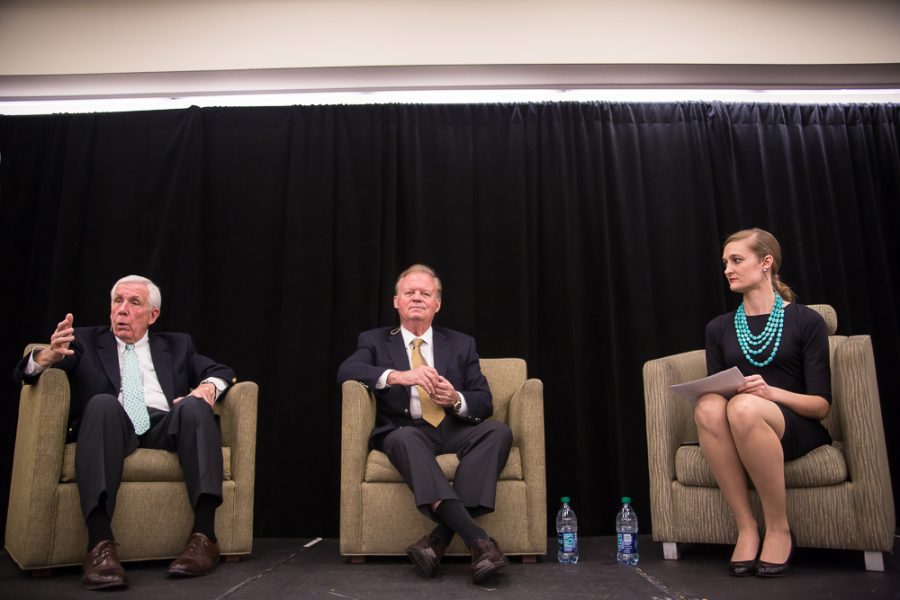 Political science majors filled the seats in the Andrews Banquet Room, eager to listen to Congressman Frank Wolf and Ambassador Tony P. Hall speak during the political science chapel “Friendship Across the Aisle: How the Gospel Unites us.”

ADDRESSING THE ISSUE
Wolf and Hall discussed microfinancing and how the United States can help other countries in need without destabilizing the local markets. They also talked about their trip to Ethiopia to help address the issue of poverty and hunger in the country and their experiences with helping people in Romania. In addition, they discussed how Christianity is declining in Iraq and how the church can help solve the issue. The last item they discussed was how they helped combat poverty in their districts.

Hall shared how even a small group of two or three Christians can greatly impact the world. He described the power two or three people can have if they gather in God’s name.

“When you have a prayer partner like Frank, God goes with you and gives you his power and you can do things that are beyond your imagination,” Hall said.
STRONGER RELATIONSHIPS
Wolf is a Republican and Hall is a Democrat, but both politicians described how they have a strong friendship despite their difference in political views. They told the story of how they became friends and Wolf described how people can form stronger relationships when they meet simply to get to know someone better rather than to discuss politics.

“If you get together over politics, it’s really not going to work — if you meet over politics, you don’t get to know the other person well,” Wolf said.

“I thought it was really cool how much they focused on personal friendship and personal development with people outside their political views and how he was talking about even getting people from different sides of the aisle together in friendship, even if it’s not in a Bible study, just having personal relationships can affect the way you act in professional settings and make everyone more cooperative,” McBirney said.
VOICING THEIR QUESTIONS
Five students were invited to voice their questions to Hall and Wolf at the end of the chapel. Students asked questions from helping others around the world to making a difference locally.

Gory takes a political science class and attended the event because she is interested in the relationship between theology and politics.

“Anytime I hear politics and theology together I want to know how politicians interplay theology because it’s a framework to everything we do,” Gory said. “I want to know how issues still get solved and what differences happen or occur.”