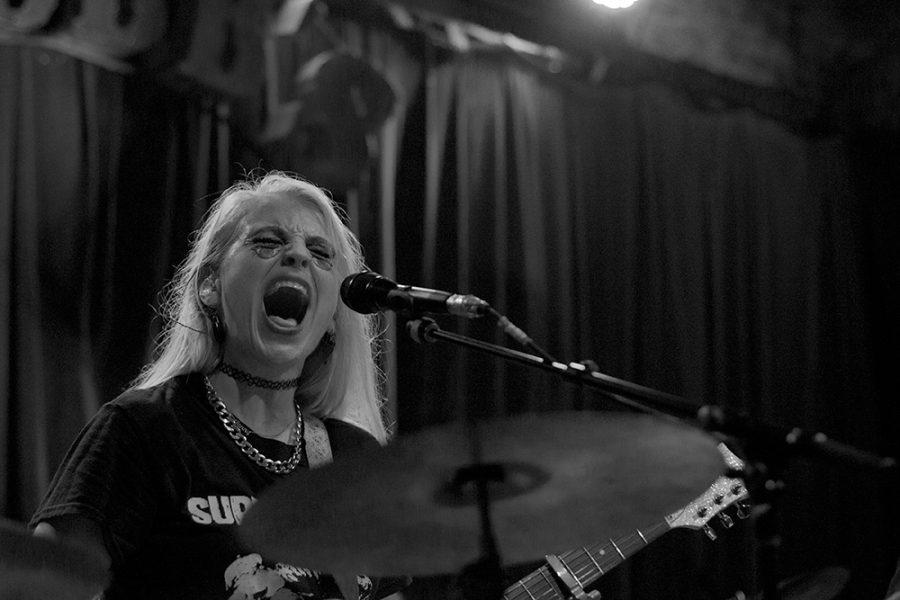 My breath smelled like barbecue most of this past weekend — probably because this hip burgeoning journalist spent time in Austin, Texas. Though the intent of our trip was an insanely exciting collegiate media conference, the Chimes editor-in-chief, web editor and I hung out last Friday night at Stubb’s BBQ and ended up checking out performances by Caddywhompus and GIVERS.

Just north of iconic 6th Street, we sought out Stubb’s for our mandatory finger lickin’ experience. BBQ sauce on face, I noticed the band was sitting at the table next to us and I jokingly asked them if they were worth listening to. Though our food comas probably clouded our judgement, we ended up staying for the show.

Hear me when I say I am glad we stayed.
A ROLLING SET
The bar and restaurant sat atop a balcony over a stage and after walking down the steps with my Biola-approved drink in hand — it was sweet tea, I promise — I danced my way into the crowd.

New Orleans-based Caddywhompus had a rolling set. Static mini TVs backed the duo sporting some garlicky syncopation and tonal variety. Their set was filled with breathtaking silence making love to perfect rhythmic diversity. The two elements are married, no worries.

Sean Hart, drummer of Caddywhompus said a longtime friendship with vocalist and guitar player Chris Rehm developed the syncopated musicality between the two.

“My bass drum is alway going to his E-string,” Hart said. “We’ve known each other forever. I grew up playing music with him, so we improvise and end up playing the same thing — maybe that’s the syncopation.”
AN ELECTRIC TONE
Dressed thematically as skeleton goths for Halloween, Lafayette, Louisiana-bred GIVERS opened with charismac Afro-beat indie goodness, running on stage from the outdoor patio. Bass and synth drive the metaphorical car — vocalists Tiffany Lamson and Taylor Guarisco sing freely out the skylight. Early in the set, a melodic scream from Lamson set an electric tone and carried it to crowd-surging high.

I had the privilege of talking to Lamson about the band’s captivating origins surrounding the devastation of Hurricane Katrina. Studying at the University of New Orleans, she and friend Guarisco lost everything together when the hurricane hit.

“Being a freshman in college you have all these ideas and goals and wishes and dreams,” Lamson said. “To have something that ultimately wipes out all of those things and makes you restart — that was a catalyst in our musical relationship.”

After being displaced, Lamson and Guarisco traveled back to Lafayette where they joined the other members of the band and began playing music together.

Their synth inclusion and Lamson’s electronic percussion performance injects the GIVERS with a unique edginess. But the chemical harmonies of Lamson and Guarisco proved the true reason I was glad we stuck around.
DENSE YET LIGHT
We also had the chance to chat with Lamson about her upbringing in the South with two pastors as parents. Knowing we were from Biola, a small Christian university, she connected some of her experiences in a southern Christian home.

“The denseness [of the South] would be that strict atmosphere,” Lamson said. “Whenever that breaks up — and maybe I’m speaking to the wrong crowd here — you have a funneled view of the world…We’ve all been through a lot. There’s a denseness that goes with that.”

She said a lot of her experiences, while they created heaviness, brought light as well.

“The whole idea of faith, believing in something unseen. I mean, what is music?” Lamson said.

Closing in rhythmic southern innovation, the crowd could not get enough. I, along with a crowd of costumed Austinians, danced and sang like it was the end, wishing it was the beginning.

“There’s something really kinetic here [in the South], that we really relate to because it’s our home,” Lamson said. “We’re dense, yet light people.”