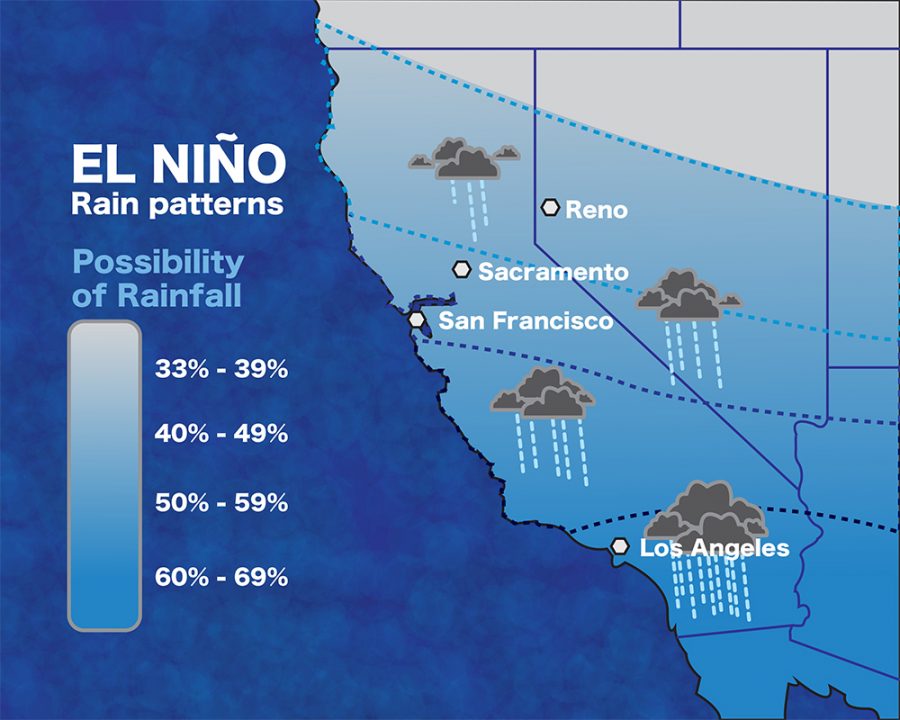 El Niño predictions for Southern California have prompted Biola to prepare for possible extreme flooding conditions on the east side of campus.

MORE RAIN THAN USUAL
There is a 60 percent chance this will be a wetter-than-average winter, a season considered to be from January to March 2016, according to the Los Angeles Times. Current thermal images are being compared to thermal images of El Niño in 1997 indicate this storm may be more severe due to the increased temperatures of the Pacific Ocean. Areas along the coast with be affected with different levels of intensity, the concentration of rain being in Southern California.

“What I’ve read is the forecasts say that Southern California is supposed to get more rain than usual and the northwest part of the Pacific Coast is probably going to get less,” said Mark McReynolds, assistant professor and director of environmental science. “Northern California is not supposed to get lots of rain so the rain will be concentrated down here.”
LARGEST PROBLEM
One large concern that comes with an increase in rain is the possibility of flooding. Facilities management, as well as other departments, are preparing for storms of a greater magnitude than California generally experiences. The largest problem on campus is the La Mirada Creek running alongside the east side of campus that functions as a flood plain.

“We’ve done some work to build some floodwalls along the creek over the last decade or so that would probably help that but again, if we really did get the 100-year flood, there’s potential that the waters would rise above the level of those floodwalls and we’d have quite a bit of water on the east side of our campus,” said Brian Phillips, director of facilities management.
RISK FOR FLOODING
In 2013, a theoretical flood map created by a civil engineer used local flood map data from the La Mirada area to create an illustration of the areas on campus at risk for flooding. Parking lots and structures E, K, O, R and S will likely be covered in water in a 100-year flood scenario.

“We just need to be prepared to anticipate heavy rains and advise students to move their vehicles and stay clear of those areas should we get that amount of flooding this year, and certainly it looks like we have the potential for that the way they are forecasting this El Niño year,” Phillips said.
TAKING CAUTION
Students will need to take caution during any severe rainstorms. Late at night on Oct. 14, 2015, Taylor Johnsrud, sophomore biology major, and five of her friends began a road trip out of town when a large rainstorm affected their travels.

“It was kind of on and off pouring down rain so much so that I started to hydroplane a little bit, so I slowed down a lot and we had to pull over a couple times just to talk and like [ask], ‘Should we keep driving?’” Johnsrud said.

Students should take caution while driving in the rain, but should also consider dangers caused by poor weather conditions. Phillips warns students to stay away from the La Mirada creek if the water level rises.

“It can be very dangerous and sometimes the force of water is kind of deceiving and doesn’t look like much, but it really is powerful,” Phillips said.

Campus Safety will lead an emergency preparedness meeting on Nov. 2, 2015 for different departments on campus. This will open discussion what areas of campus have the potential to become dangerous during wet weather and how they will notify students in the event of a serious rainstorm.