Men’s basketball heads into the new season with high hopes. 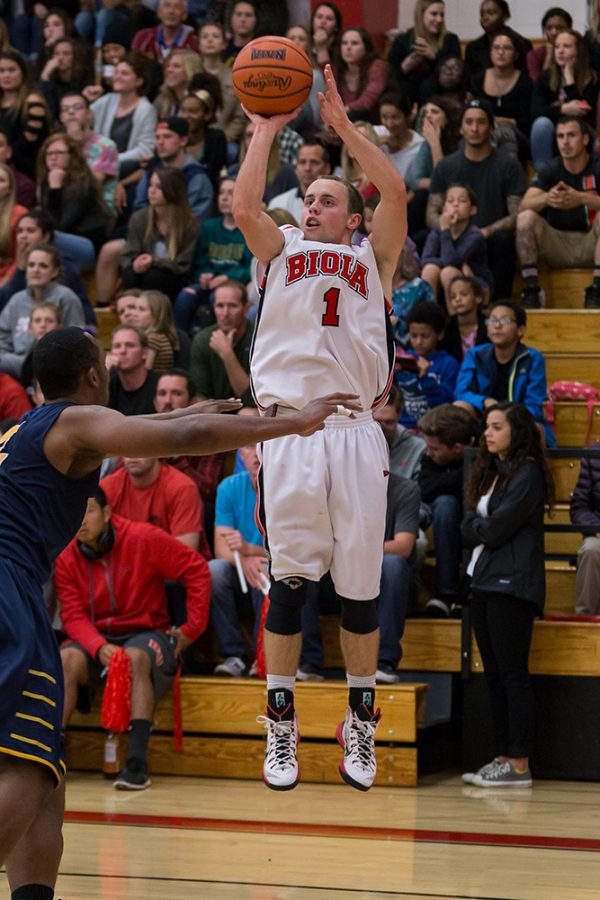 In preparation for the 2015-2016 season, the men’s basketball team looks to continue their streak of eight consecutive years of season records above .500, just barely reaching the mark last year with their 16-15 overall record. With the 12-man lineup consisting of half returners and half fresh talent, the team will be very interesting to watch as the season progresses.
RETURNING PLAYERS
The returning players are junior guard Dakari Archer, senior guard Caelan Tiongson, sophomore guard Blake Shannon Jr., sophomore forward Steve Herve, senior forward Christian Misi and sophomore guard Sal Carlos. Archer had a fantastic season last year, as he averaged 15 points per game and ended up with 420 points on the season. The 6’7” forward Steve Herve was a force to be reckoned with in the paint last season, ending up with 44 blocked shots on the season.

“A big change this year is our versatility,” Tiongson said. “We aren’t necessarily the biggest group, but we have the right combination of size and skill at a variety of positions that will make us hard to defend as well as making us a good defensive team.”
INCOMING FRESHMEN
There are some new faces to keep an eye out for as well, especially in the form of two incoming freshmen. Guard Trevor Treinen played three years of basketball at Servite High School in Irvine, Calif., and was on the first team all-league as well as ended up fifth all-time in scoring for Servite. The other freshman to watch out for is 6’5” guard/forward Levi Auble who hails from Anchorage, Alaska He played four years at Anchorage Christian School, was named the 3A Player of the Year, and also won the AABC high school dunk contest in his senior season.
ANOTHER STORYLINE
Another storyline of the season is for head coach Dave Holmquist, who is only nine wins away from 900 career wins, an astounding milestone. His 891 wins in 38 seasons of coaching puts him seventh overall on the list of winningest men’s basketball college coaches at any level. While a worthy goal to aspire to, the team has other goals they want to reach this season.

“As a captain, I feel comfortable saying that it is an expectation for our team to play hard every single game,” Tiongson said. “I think if we can just focus on competing on a consistent basis, then our big goals of winning the [Golden State Athletic Conference] and making the National Tournament will fall into place.”

The Eagles begin their season with a short road trip, as they match up against the Benedictine University at Mesa Redhawks in Arizona on Oct. 30 at 7 p.m. They then will face the Embry-Riddle Aeronautical University Eagles on Oct. 31 at 3 p.m. The first home game is on Nov. 3 at 7:30 p.m., when they play the Benedictine Redhawks again.