Torrey Conference jumps back to gym

Though day one took place on Metzger Lawn, conference attendees will now convene in Chase Gymnasium. 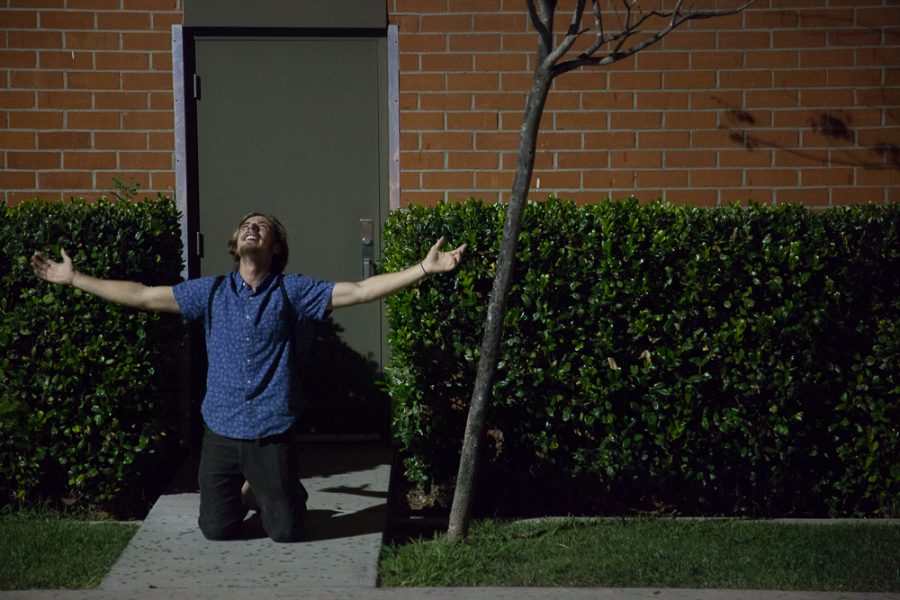 The Torrey Memorial Bible Conference has experienced venue changes while celebrating its 80th anniversary from Oct. 14 to 16 with the theme “Altær” —  a play on the meanings of altar, a physical location, and alter, to change.

CHANGE IN LOCATION
One large change made to the conference this year is the location, as the main sessions were originally hosted outside. However, a message was released at 10:30 p.m. on Wednesday evening through the official Torrey 2015 app that stated that the conference will be back in the gym starting Thursday morning.

Kenny Miller, lighting and video engineer for event services, explained that due to forecasts for Thursday showing the possibility of rain, all future sessions that were planned to be on Metzger lawn have been moved. The gym will have a stage, chairs and the bleachers set up in a similar fashion to most normal, weekly chapels.

Students were originally concerned with the conference taking place outside due to the effect the weather could have on the event. However, attendees were caught off-guard by a thunderstorm that began unexpectedly during the Wednesday night session.

“Our equipment is doing well. We always have a rain backup plan, so that looked like having those tents that were ready to put over the soundboard and my team knows what the expensive stuff is so they went and covered up the projector quickly,” Miller said.
IRONIC TIMING
The timing of the lightning strike was ironic, said Noah Schrader, senior fine arts major. The session was paused after singing Kim Walker-Smith’s “Spirit Break Out” for emcee Shelbi Shutt, undergraduate admissions associate, to lead the audience in prayer when lightning and thunder interrupted the service.

“It was really cool especially because it’s been so hot and even in just that moment, of this cool little expression, I think, of God’s power,” Schrader said.

Carolyn Gordon, associate professor of mass communication at Mississippi Valley State University spoke at the first session on Wednesday morning entitled, “In View of God’s Mercies,” and James K.A. Smith, professor of philosophy at Calvin College, spoke at the evening session on Wednesday entitled, “You Are What You Love: The Spiritual Power of Habit.”

“I think the most important thing is that we do not worship out of duty, but we worship out of gratitude for what God has done, is doing and will do in and through our lives, that we are living, being worshipers,” Gordon said. “You can enjoy a service, but it’s not for entertainment purposes. You’re worshipping for God relation purposes.”
THE THEME
Students, including sophomore psychology major Nathan Chisholm, showed interest in the unique theme name and how this topic will shape the conference.

“Learning more about what this theme means [is exciting] because when I saw it at first, I didn’t really know what altær was, I was like, ‘Yeah! Torrey Conference! But I don’t know what that is,’” Chisholm said.

James Petitfils, assistant professor of New Testament and Early Christianity in Talbot School of Theology, and Shutt were the hosts for morning session on Wednesday. They introduced the theme and new location before introducing Gordon for the first session.

The theme verse, Romans 12:1, talks about being a living sacrifice as a way of worshipping God and was a focus of Gordon’s talk. This entrance and first session helped students become engaged and excited for the conference.

“I liked the first [session] because I felt like you really got the sense — 80 years this has been going on. It’s a huge tradition, it’s a big deal here at Biola,” said Marijane Fasana, freshman nursing major.