After going 7-0-2 the first nine games of the season, Biola Women’s Soccer are 7-1-3 after tying with Westmont and losing to Marymount last week. 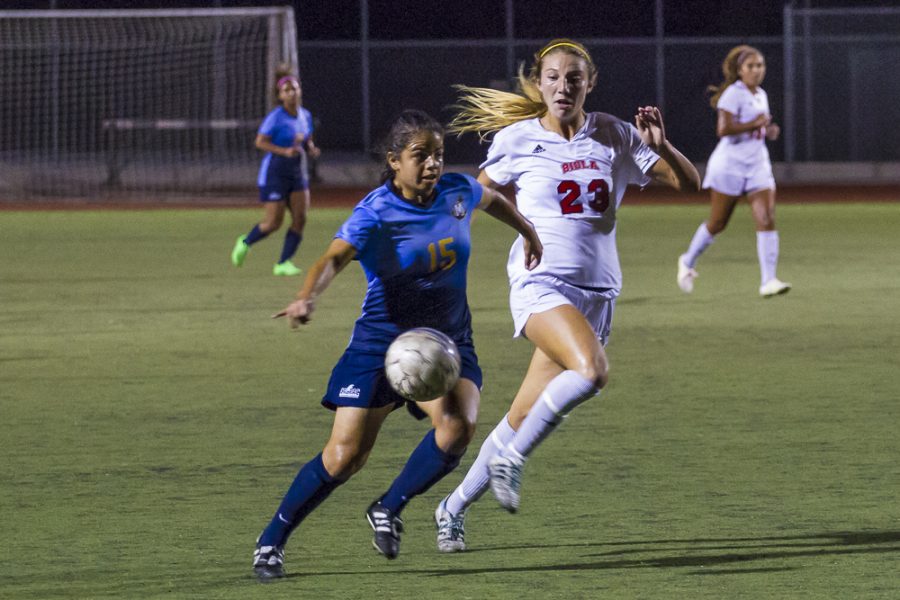 The No.14 Eagles have fallen three games behind leading rival Westmont College in the Golden State Athletic Conference, placing them fifth in the standings with seven games left in the regular season. After tying with Westmont on Sept. 30 and losing to Marymount on Oct. 3, the Eagles finish the week 0-1-1. Biola looks to recover from a lackluster week with upcoming matches against the William Jessup University Warriors and then the Menlo College Oaks.

In the game against Westmont, fouls were abundant and the fans got to see one of the most physical games of the season from both teams.

“We need to stay strong and prevent those first and second quick goals in the first half so that we can attack early on in the second,” Burns said after the Westmont game.
Against Marymount
On Oct. 3 Biola hosted Marymount College of California in a non-conference game.

Despite a focus on preventing early goals, Biola went down 0-2 early in the first half and could not dig themselves out of that hole, thus losing to Marymount 0-2 – their first loss of the season. Even though Marymount won, Biola played a more strategic game by controlling the ball the majority of the game. In result, two lucky goals sunk the Eagles.

“Some games come down to inches, and that is what you saw out here against Marymount,” said Erin Brunelle, head coach.
Capabilities and Strengths
Despite a winless week the Eagles displayed many strengths. Biola was able to show they can take control of the ball and hold it throughout the whole game even against teams like Westmont.

The Eagles showed they are capable of a stout and physical defense despite injuries. Sophomore defender Cat Newberry took on a larger role by being the defender most relied on halting opposing offenses, showing that she holds the team together, especially on the backline. There is also the play of defender Madyson Brown with her super-aggressive style that has helped provide a strong defense.
Looking Ahead
Despite a grounded week, the Eagles look to have a stronger week as they play William Jessup who is 0-3 in GSAC this year and Menlo College a second time after tying 1-1 in their first encounter. Biola’s next game will be home against the Warriors Oct. 8 at 7:00 p.m.