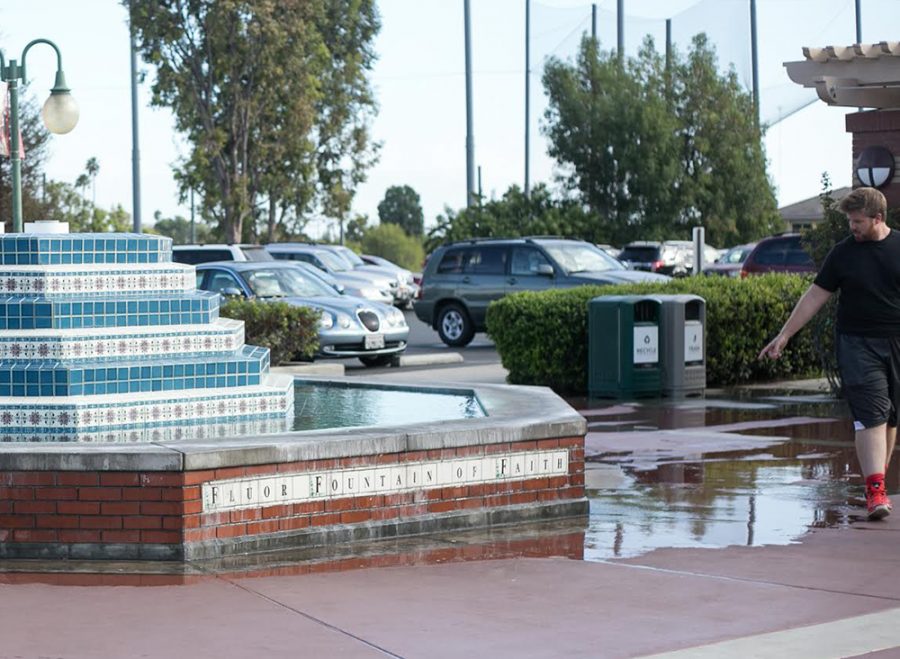 Fluor Fountain overflowed and leaked from multiple cracks when an autofill valve malfunctioned on the evening of Monday, Sept. 14. Facilities Management was contacted shortly after and manually shut off the valve within an hour of the incident.
Malfunctioning Autofill
Senior international business and film major Joseph Olvera, was present when the fountain began leaking water and was confused as to where it came from.

“It just had puddles of water all around it which was weird because, like, where did all the water come from?” Olvera said.

An autofill function usually maintains the water level of the fountain. However on Monday, the valve was stuck open, which caused the overflow. Water seen leaking from the sides was due to a crack between the concrete cap and the brick, mainly on the north side. When everything else works properly, the level of the water is maintained and this crack has no effect on the fountain.

“There is a crack beneath the concrete cap that runs the perimeter of the fountain and the water level was up above that. It was not designed to hold water up at that level,” said Brian Phillips, director of Facilities Management. “In [regards to] the life of the fountain we probably need to pull that concrete cap off and replace it. Again, it’s really not an issue when the fountain’s functioning normally.”
The Importance of Attention
Phillips explained the importance of paying attention to any problems that may arise in order to ensure the conservation of water.

“Everyone’s trying to be extra attentive during the drought to make sure we’re not letting leaks like that persist. We’re responding to them quickly so I thought our team did a good job responding,” Phillips said.

The last large maintenance project on the fountain occurred in 2010 when the interior was resealed and the tiles were replaced.