Islam expected to grow as large as Christianity

As the fastest growing religion, Islam is projected to have just as many followers as Christians by 2050. 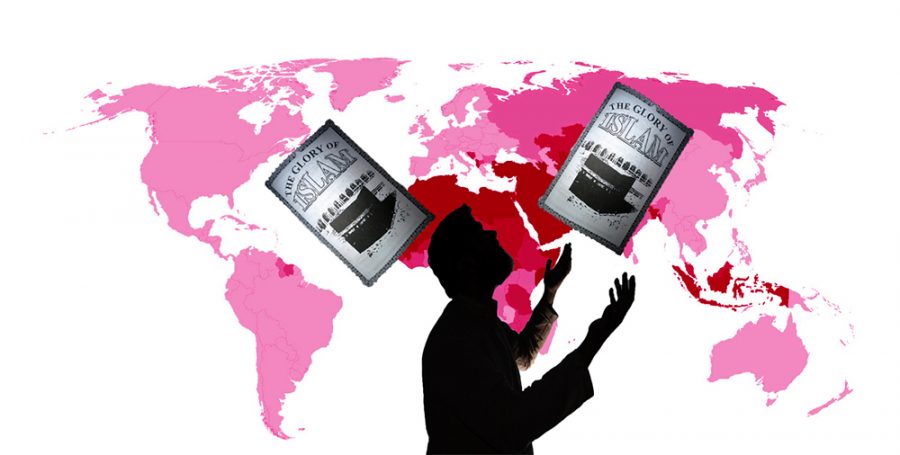 The world Muslim population will soon be as numerous as Christians, according to an article by Pew Research.

Islam is expected to make up 29.7 percent of the world’s population, representing 2.8 billion people by 2050, while Christians will remain at 31.4 percent. The main reason for Islam’s growth is due to Muslims having more children compared to other religious groups, according to Pew Research’s article.
The Appeal of Islam’s Simplicity
While Muslims pass their religion on to their children, they also aim to convert others. Judith Rood, professor of history and Middle Eastern studies, says the main reason for their success is Islam’s simplicity, organization and focus on community and family.

“A lot of people are attracted to Islam because it focuses on the unity of God and so, therefore, there’s not a lot of theological debate about the nature of God and it’s specifically anti-trinitarian. A lot of people have a hard time with the trinity and it’s too complicated and all the theology really turns people off and so they prefer to have things simplified for them,” Rood said.

Muslims turn to Da’awa, or proselytizing, anywhere they can. Assistant professor of intercultural studies Moussa Bongoyok says most Muslims take their faith from their families.

“I would say most Muslims are born into Muslim families. It’s not so much by conviction that Islam is the best religion, the best teaching, the best theology but by affinity by culture, the sense of belonging and so that’s what makes Islam a strong religion,” Bongoyok said.
Active Proselytizing
The largest branch of Muslims gaining more followers are the Sunni, Bongoyok said, though all sections are active in proselytizing.

“Saudi Arabia has money and uses that money also to spread Islam all over the world. That may be one of the reasons why the Sunni’s Islam is growing a little fast,” Bongoyok said.

To convert others, Muslims now use a variety of means to proselytize such as trade in Africa, door to door, open air, apologetic type debates and even missionaries to spread Islam into other areas. Depending on the region, different people will be affected by the religion, but Islam is appealing to the poor in Africa and some parts of Asia, Bongoyok said.

“Social activities work among the poor. They have schools, they have hospitals sometimes, they build wells and they give money, food and so forth,” Bongoyok said.
The Next Largest World Religion
Bongoyok says in the West, Muslims have the most success in the jail system, but also young people and women in the United States. Islam does not limit itself to just these categories and have strategies for highly trained intellectuals and go into universities and businesses.

“As you know, young minds are more open to new things than when you talk to someone who is sixty, it’s harder for him or her to change,” Bongoyok said.

Ultimately, Rood does believe that Islam will be the next largest world religion, but Bongoyok disagrees due to possible false statistics. Bongoyok spoke and taught in several African countries but has found that some Muslims are rejecting Islam because they are unsatisfied but say they are Muslim to find work.

“They are counted as Muslims just because they are born into Muslim families and sometimes, just because they have it on their ID, but this is tricky. You live in a country where you know if you put Christian on your ID you cannot find a job and so some people put Muslim,” Bongoyok said.