Marvel and DC battle for the box office

Marvel may hold the commercial crown, but DC paves the way for diversity and edginess. 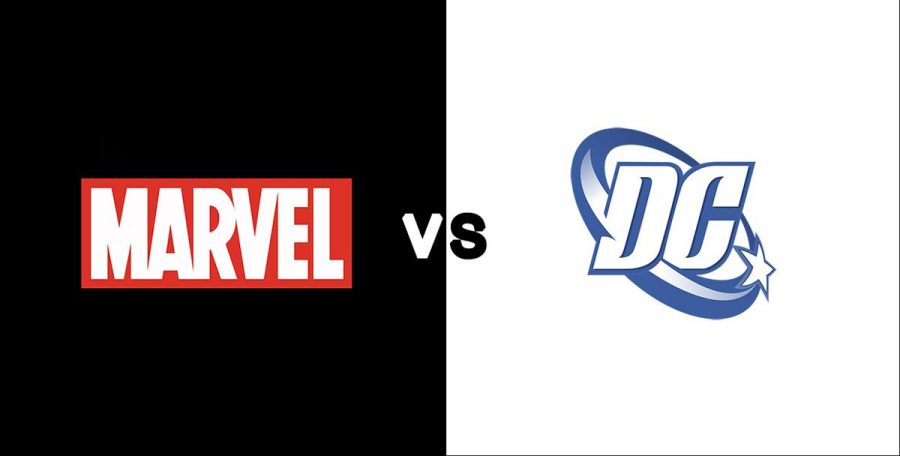 Do you remember that glorious moment when some of the world’s favorite superheroes — The Hulk, Iron Man, and more, teamed up to save the world? And I am sure everyone knows how Batman saved Gotham City from a lethal time bomb. If these characters or scenarios sound familiar, then you probably fall somewhere on the spectrum of comic fans. Some fans have read comic books for years, and others might just enjoy the film adaptations, but no matter the level of devotion, it ultimately comes down to preference — Marvel or DC?
THE MARVEL POWERHOUSE
The power of what Marvel calls the Marvel Cinematic Universe is undeniable. Since the release of “Iron Man” in 2008, Marvel has released at least one film a year to massive box office numbers, and they have plans for more films through the year 2019. According to Box Office Mojo, Marvel’s “The Avengers,” which was released in 2012, grossed $1,518,594,910 worldwide. This staggering number secured the success of what Marvel calls Phase One. Many could argue that Disney’s acquisition of Marvel for around $4 billion in 2009 began the global domination of the franchise, though it is key to note that “Iron Man” was released independently by Marvel. Still, Marvel’s success might have been more muted had the entertainment conglomerate not backed them.

By comparison, the success of DC seem miniscule. The two major characters of DC Comics, Superman and Batman, have gone through numerous adaptations since the early 1950’s. But aside from a duo of moderately successful Batman films directed by Tim Burton in the 1990’s and a trilogy of highly successful Batman films directed by Christopher Nolan in the late 2000’s, movie adaptations of DC comics have been widespread but cease to please large audiences. Where an individual film like “Superman” or a trio of them like “Batman” might make big bucks at the box office, DC had no formal plans for their cinematic universe, though their comics, much like Marvel, continue to draw readers.
DC’S NEXT MOVE
In October, DC announced a slate of upcoming films through 2020, based around a continuing universe established in 2013’s “Man of Steel.” While it may seem like DC felt pressure to compete with Marvel, they are also making advances where Marvel has stalled. When DC announced the lineup, people noticed it included a stand alone Wonder Woman film, and Marvel has never made a female-led movie. Since then, Marvel announced plans for Captain Marvel, debuting shortly after Wonder Woman. In addition, DC has made casting choices that include native Hawaiian actor Jason Momoa as Aquaman, LGBT actor Ezra Miller as the Flash and African-American actor Ray Fisher as Cyborg. Compare this list to Marvel’s and the difference is worrying. In the Marvel films, only one female has a starring role: Scarlett Johansson as Black Widow. And the only African-American superhero is Anthony Mackie as the Falcon, a side character in “Captain America: The Winter Soldier.” Marvel did announce a “Black Panther” film starring African-American actor Chadwick Boseman, but their diversity still wears thin in spite of the numerous films churned out every year.

It seems we remain poised at the precipice of major showdown between two studios with the power of the comic book behind them. While one makes forward progress with diverse casting and edgier stories that have gritty realism, the other continues on the path that led them to superstardom. The results are still big, but the question remains whether following the same formula will continue to work. No matter your allegiance, give Marvel and DC a chance to prove themselves, and you might be surprised at the films that end up making an impact.