Physics of the heart

“The Theory of Everything” is a story of love over time. 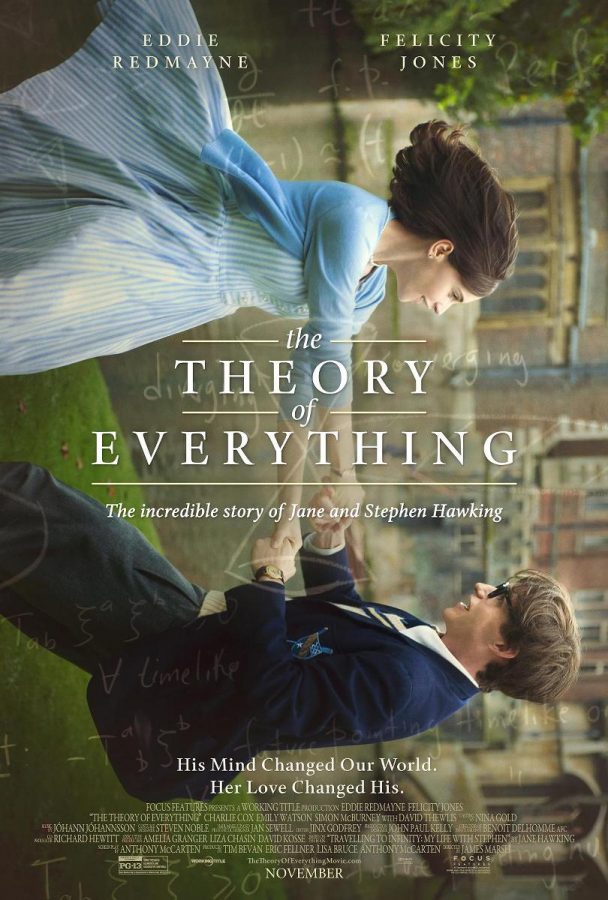 The world’s most famous robotic voice, one we have all probably heard many times, belongs to renowned physicist and cosmologist Stephen Hawking. Diagnosed in the 1960s with a form of motor neuron disease, Hawking is mostly paralyzed and can now only speak through his speech generating device. Despite his physical setbacks, Hawking has continued his research and discoveries over the years, including publishing his best-selling book, “A Brief History of Time.” Though an inspiration to the scientific and medical communities, Hawking’s personal life serves as the subject of the film “The Theory of Everything.”

In the opening scene of the film, we see Stephen Hawking (Eddie Redmayne) as he catches sight of Jane Wilde (Felicity Jones) at a party. They make an immediate connection and spend the entire night away from the crowd, just talking. Over the next few weeks, Stephen finds himself falling for Jane, despite their differences and his intense focus on his doctorate research. Slowly we see Stephen begin to lose control of his limbs — he struggles to pick up a pencil off the floor, stumbles over stairs, and eventually trips and falls in the middle of a walkway, head smacking grotesquely on the pavement. In the hospital the doctors tell him about his condition and that his projected lifespan is two years. Stephen has only one question, which tells the viewer everything they need to know about him — “What about the brain?”

Despite his efforts to push Jane away after this discovery, she stubbornly refuses to give in to his desire to protect her from harm. Built from tough English will, she remains by his side even when things look bleak, though Stephen ends up living far past his predicted two years. They marry and have three children together before the relationship ends up in shambles, the weight of all they have been through together ultimately driving them apart. Jane and Stephen, however, remain close friends to this day.

The film is a little light on story — it makes reference to Hawking’s extraordinary discoveries but never quite develops them in a way we can understand and fully appreciate. Likewise we see him suffer from his disease, but we never really hear the characters speak about how it impacts them. Often, the story is told through the actions and facial expressions of the characters, showcasing the enormous talents of Redmayne and Jones. Utterly unrecognizable as the movie progresses, Redmayne pushes himself to every physical limit in order to play Hawking at every stage of life. It makes for a powerhouse performance in a year full of them and Redmayne seems destined for huge award nominations for this intricate interpretation of such a well-known figure. Jones, likewise, holds her own with passionate zeal. She appears composed, sensible, and remarkably patient, barely showing the strain of the life that she has chosen to lead. The film itself is solid despite its story issues, but the real reason to watch “The Theory of Everything” is for the transformative performances at its heart.