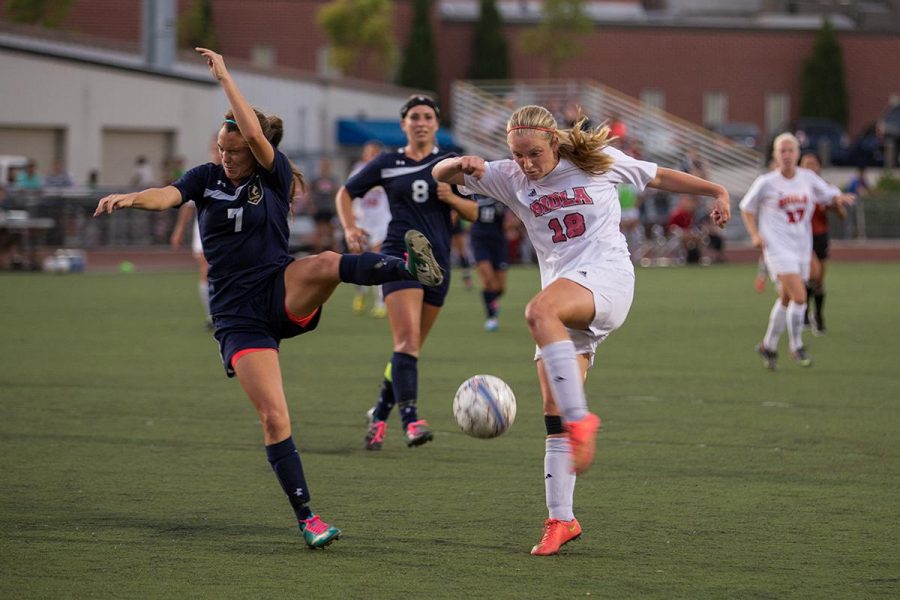 Vanguard scored both of their goals in the first half, resulting in a 2-0 lead for most of the game. The Eagles did not get on to the scoreboard until the last five minutes of the game, thanks to a goal from sophomore midfielder Jessie Burns. Vanguard beat Biola 2-1.

“We didn’t really come out ready in the first half,” Burns said. “I think we came out with a mindset not ready to win yet, but the second half we looked a lot better.”

The second half ended up better for the Eagles, who improved their three shots on goal in the first half to 10 in the second. With only five minutes left in the game, Biola found the back of the net after an unassisted goal by Burns.

“We were hungry for it at the end” said Burns. “We all were hungry to get a goal     and we all worked together. I couldn’t have done it without them but I was happy we finally got one.”

Vanguard’s victory over Biola gave the Eagles their second conference loss of the season. This defeat occurred only four days after their loss to Concordia University.

“Both the past two loses, the Concordia game and the Vanguard game were really frustrating,” Starbeck said. “I think the Vanguard game was even more frustrating because we couldn’t get that win after such a big loss and to get another loss back-to-back was a big bummer and we really should of had that win. Both big losses that we’re going to have to get past.”

Biola and San Diego Christian remained scoreless at the end of the second period. Senior goalkeeper Briana Williams came up with four saves to shut out the Hawks and keep the game tied at 0-0 throughout regulation and the first overtime.

Four minutes into the second overtime, senior midfielder Amanda Lillicrop shot the ball wide.  Starbeck gathered the rebound and put the game winning goal past the goalkeeper to the back of the net. Biola beat San Diego Christian with a final score of 1-0.

This game held special importance to Biola as it was senior night and the last regular season home game for the Eagles.

“It’s really important,” said freshman defender Catherine Newberry. “Especially being senior night with just with all the emotions that go along with that. It’s huge.”

With this win, the Eagles now rank 12-3 for the season, tying coach Todd Elkins’ previous single season record of 12 wins in 2012. Biola will look to beat this record in their next game against Westmont College on Oct. 25. The Eagles beat the Warriors 1-0 earlier this season.