People involved with Punk N' Pie prepare for their upcoming performances in the show. 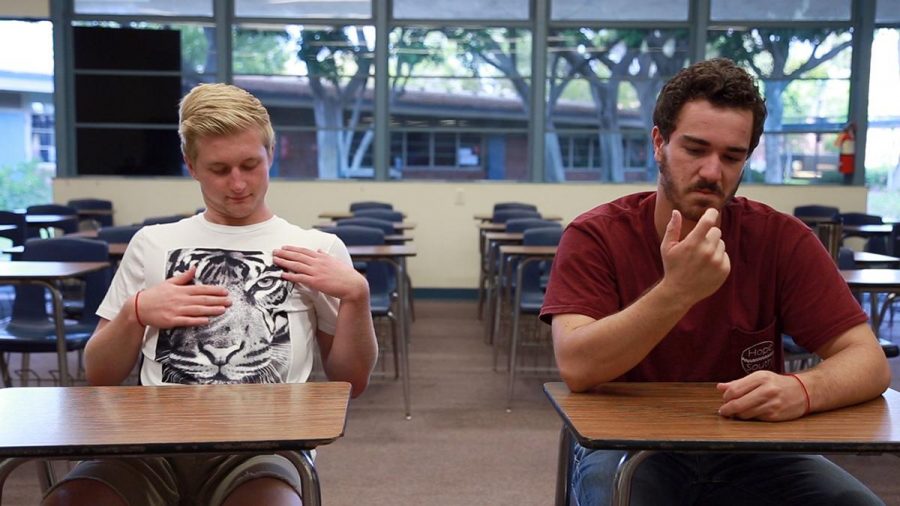 This year's Punk 'n' Pie hosts Zac Brisson and Riley Mailman have tailored their jokes so that every member of the audience will have a good laugh. | Photo courtesy of Associated Students

The 2014 Punk 'n' Pie hosts Zac Brisson and Riley Mailman have tailored their jokes so that every member of the audience will have a good laugh. | Photo courtesy of Associated Students

This year’s Punk N’ Pie, which will be held tomorrow, includes an assortment of acts as well as logistical changes.

Students and their family will be able to wait in the same line before entering this year’s Punk N’ Pie, an annual contest run by Associated Students that showcases student talent.

Shaylynn Knuppe, junior psychology major and AS social events coordinator with the help of her four staff members, decided to combine students and parents in the waiting lines to enter the Chase Gymnasium, as opposed to last year where the parents and students stood in separate lines.

By waiting in the lines together, it reduces confusion on finding family members once entering the gym. An extra row of bleachers has been added to provide more seating for students, parents and alumni.

“We want to provide an environment where students, alumni, and families can all come together and appreciate the talents of Biola, and in that, appreciate talents you wouldn’t typically see, because some of them are pretty new and different,” Knuppe said.

Riley Mailman, a junior business marketing major, and Zachary Brisson, a sophomore biblical studies major, will emcee this year’s Punk n’ Pie. Mailman and Brisson said they have tailored jokes that all audience members can laugh at.

“I think that’s what really makes us different, that we are trying to appeal to everyone in the audience,” Mailman said. “I think I’m nervous because the stakes are high and I want to meet and exceed expectations.”

Infographic made by Angelica Abalos/THE CHIMES

Out of the 31 acts that auditioned, 12 were given a slot in the show. The acts for this year’s Punk n’ Pie range from crumping to sewing.

Freshman business major Rachel Cordill displayed her talent of sewing on the second night of auditions. Cordill took fashion classes in high school and designed clothes that appeared in her high school’s fashion shows, a theme she incorporated during her audition performance.

“It was like a little fashion show to display the sewing that I had done,” Cordill said.

Capo Rhythms and Crew consists of musicians from a variety of majors and singers from across campus, including dancers from XOPOC.

“We’re going to be having a blast and we want everyone else to have fun watching what we love to do,” Anderson said.