Students involved with Punk 'n' Pie prepare for their upcoming performances on Oct. 2. 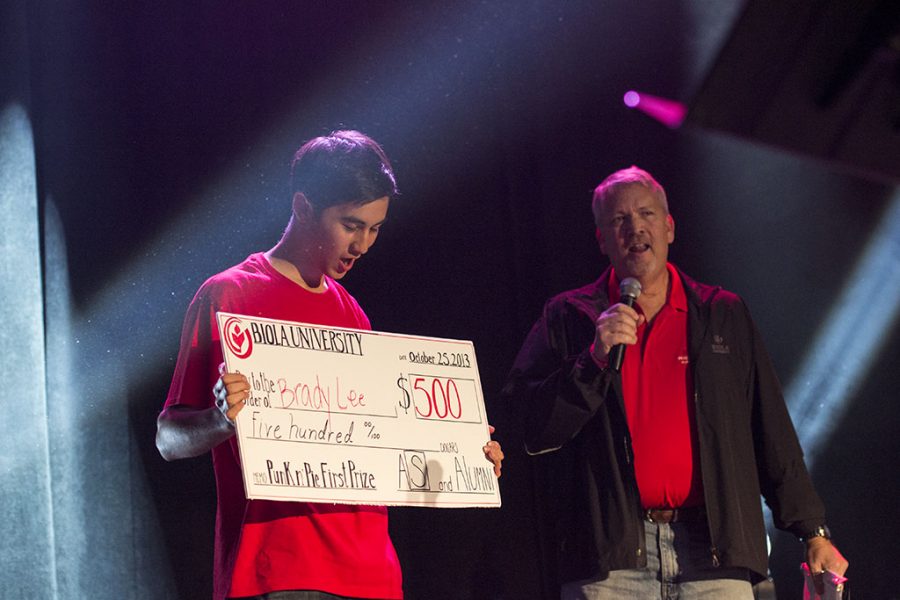 At Punk ‘n’ Pie, the annual Biola talent show, students will display their abilities to sing, dance, perform magic and much more in Chase Gymnasium before an audience of their peers. The acts show a broad range of student talent, including some acts that have not been seen at the show in the past and other Punk ‘n’ Pie veteran acts returning with fresh material.

However, while students prepare to enjoy watching their peers’ performances this Friday, the performers themselves have been preparing in a much different way, since before the auditions. On Oct. 2, Associated Students asked students to bring their best abilities to Sutherland Auditorium to audition for one of 12 acts that will be presented this weekend.

“I was slightly nervous because we only had one complete rehearsal before auditioning,” said senior film major Rhylee Anderson. “So as it goes with any group of musicians who haven't really practiced together, we were either going to sound really great or really awful.”

Anderson performs with a group known as “Capo, Rhythms and Crew”  which she founded along with senior ISC major Katie Voytasek. They consider themselves a millennial pop symphony group that performs pop mashups with drums, a bass, a guitar, keys, a saxophone, a trumpet, an electric guitar, six backup singers and two lead singers. Randomly comprised of students from different years, majors and circles, the group aims to be void of cliques.

Following them, sophomore biblical studies major Sherwin Salonga took the stage. He dances with a crew called “Krump” that travels the world spreading the gospel.

“By the grace of God I met Tight Eyez and got to be in his crew as Baby Tight Eyez,” Salonga said, “Ever since, I have traveled to Russia, Japan, Australia, Germany and the Philippines. As I love to travel and dance, God put it in my heart to spread the word while I am out in those areas in the world.”

He said he does not dance a traditional style and questions how people will receive it.

“I never know how people will react when I show them krump. It has that stereotype of just wild dancing, but it’s my mission to show that krump has evolved and is one of the most controlled dances. It requires a lot of power,” Salonga said.

Dance proved to be just one of the many strong acts at the auditions.

“So it’s stand up comedy, but it combines regular stand-up with Weird Al style of comedy,” Nesbit said. “My first time doing it was last year at Punk ‘n’ Pie, but this year it’s just me. It’s all new stuff.”

Despite what may end up on stage, 31 hopeful acts tried out to be a part of the final show.

Judges Shaylynn Knuppe, Sere Brown, Milagro Menees, Chelsea Vukovich and Katherine Roberts are members of the AS’ social events staff team and took on the harrowing task of deciding who would make it through. The criteria demanded someone who would entertain, appeal to a wide audience and show off a unique talent.

“We wanted acts that accurately represent the diverse and cool talent our school has to offer,” Knuppe said. Despite former complaints that Punk ‘n’ Pie exists as another singing show, audition turnout brought a wide range of acts that featured far more than just that.

Freshman business major Rachel Cordill was just one of many who brought variety to Sutherland.

“My act is a mini runway show to display my collection of clothes, all of which I sewed myself,” Cordill said. “The audition was fun and simple.”

With each act receiving email notifications after the decisions made, the next few weeks would be filled with rehearsals and preparations all leading up to their Friday night performance. This did not stop veterans of previous years from putting in extra preparations.

Rehearsing down to the last second before walking on to stage, “V3 Dance” came more than ready. This marks their second time auditioning after they expanded their group to 20 members, but they did it for more than just the fun. Leader of the group, senior art major Edward Moon, believes that God can be present in any performance.

“We want the audience to see that there are capable Christian dance teams that only dance to Christian music,” Moon said. “It is possible.”

Following the event, the Alumni Board will serve up soft jazz tunes and free slices of pumpkin pie at the fireplace pavilion during Pumpkin Pie LIVE. From dance performances and fashion shows at Punk ‘n’ Pie to the free dessert and jazz music at Pumpkin Pie LIVE, this weekend provides a wide variety of talent and festivities for students to enjoy.