Whiplash boldly lives up to its name

"Whiplash" stuns with visual and sonic intensity, while posing the age-old question of what lengths we must be willing to go to achieve greatness. 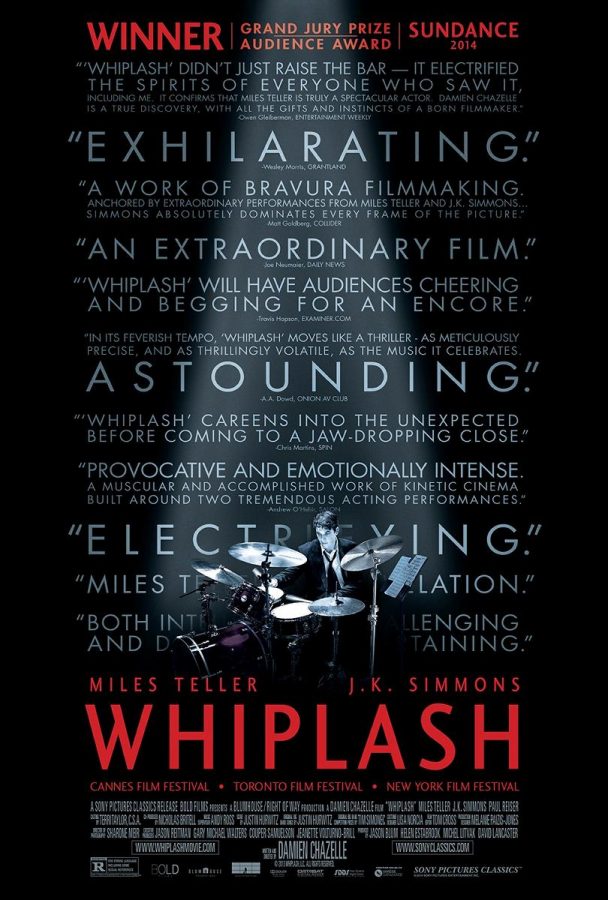 "Whiplash" stuns with visual and sonic intensity, while posing the age-old question of what lengths we must be willing to go to achieve greatness. | hollywoodreporter.com

For those of you not steeped in film industry knowledge, the Sundance Film Festival is where independent films and fledgling filmmakers go to spread their wings and try to prove they are a force to be reckoned with. In the past few years, crowd pleasers such as “Like Crazy,” “Beasts of the Southern Wild” and “Fruitvale Station” have walked away with top prizes. At this year’s festival, the top honor went to a riveting musical drama entitled “Whiplash” — a powerhouse film that demands our attention.

“Whiplash” follows college freshman drummer Andrew Neyman (Miles Teller), who gets picked to join the prestige jazz band at his elite and cutthroat music conservatory, under the tutelage of the unpredictably intense Terence Fletcher (J.K. Simmons). An epic battle ensues between student and teacher as they stop at nothing to achieve musical perfection. Neyman abandons everything in life in an effort to achieve his true potential.

Leave it to director Damien Chazelle to make jazz music erupt like guns in warfare. “Whiplash” flows with such visual and sonic intensity, that it becomes hard to recall any other musically driven film that has moved me in a more visceral way. Each drumming sequence is perfectly calibrated for maximum impact as Chazelle keeps the rhythm of the cinematography and editing dynamic, yet controlled — a testament to his meticulous nature of planning each and every shot before stepping on set. That dedication pays off in spades.

Musically, arrangements such as “Whiplash” and “Caravan” are executed with such passion and intensity that the films feels like you are at a great live show. Teller and Simmons, who did most of their own instrumentation, demonstrate such a mastery of the compositions, that I would not be surprised if they gave up acting and went into music full time. I would pay top dollar for that performance.

What makes “Whiplash” such a marvel is not just the musical prowess, but also the lean deftness of Chazelle’s screenplay. He has created two of the most interesting and complex characters I have seen on screen this year. Neyman is a hopeful and idealistic drummer who has a genuine natural talent for percussion. But, he may just not be good enough for the mercurial Fletcher, who will stop at nothing to push his students to either the pinnacle of their talents or the edge of sanity. Also, none of his psychological warfare would be complete without spouting some of the most creative insults ever imagined. Although privy to sudden bursts of emotional, verbal and sometimes physical abuse, his students accept his crazy antics in the belief that he makes them them better musicians with the possibility of succeeding in the tough New York industry. Neyman, who dreams of being one of the “greats,” rises to the challenge and pushes himself beyond the limits of healthy behavior for his art — uncompromisingly leaving his body and soul subservient to potential success. Teller and Simmons give two of the best performances I have seen this year, leaving literal blood, sweat and tears for us to enjoy on the silver screen. Literally, Teller bleeds on his drum set. The music is that intense.

As the movie crescendos to a rousing finish, “Whiplash” leaves the audience with a fascinating question — is abandoning all that makes you human worth the push to greatness? Would greatness even be possible without the brutal and blunt abuse of the Fletchers of the world, and where do we draw the line? The movie remains refreshingly ambivalent on the subject, instead showing us the sacrifices greatness requires. My head is still reeling from “Whiplash,” and I cannot wait for an encore.