In an exclusive interview with Anna Frost, actor and musician Noah Munck discusses his goals for the future and his experience thus far at Biola. 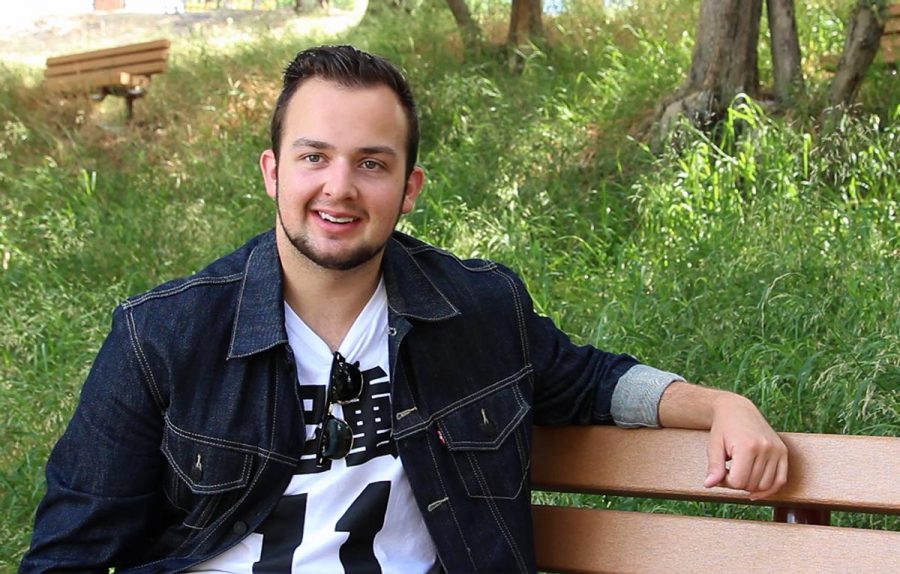 In an exclusive interview with Anna Frost, actor and musician Noah Munck discusses his goals for the future and his experience thus far at Biola. Listen to two of NoxiK's recent tracks below:

If you heard that Gibby, Sam and Carly’s endearingly awkward friend, attends Biola, you heard wrong. Despite the rumors flying around, Gibby Gibson is not a freshman cinema and media arts major at the university — but Noah Munck is.

Munck may have spent five years playing the character of Gibby on Nickelodeon’s shows “iCarly” and “Sam & Cat,” but if you search the campus for the chubby, khaki-pants and checkered shirt-clad young man, you will easily miss Munck. To begin with, Munck is trim, which he attributes to an intense year of effective yet unenjoyable CrossFit training. Looking cool and collected in a denim jacket and jeans rolled up at the ankle, Munck stands miles away from his most recognizable character.

There is more to Munck that meets the eye, or the IMDB profile.

Anna Frost: Can you tell me a bit about yourself?

Noah Munck: Well, I am an actor/now musician, which is kind of a weird part of me.

I’ve been an actor since I was 10 years old. I started with acting classes ‘cause my sister got me into them and I went to improv class. They had agent auditions at the Performers Academy, the place where I took classes, I auditioned for an agent and from there on out I got an agent — my sister and I both got an agent — and I got commercials here and there, and then small TV shows, and then small parts in movies, and then I got iCarly and that kind of just like was the role that took me for 5 years. It was really cool, this big show was 5 years of my life and it was a really cool experience and time altogether.

And then, a year after that — I’d always been a fan of electronic music, dubstep and music and stuff like that — I taught myself over these past few years from when I was 16, I’m 18 now, how to produce music, like the ins and outs of using software and musical theory I guess, in a way.

A.F.: So are you still pursuing acting right now?

N.M.: Yes I am. I am auditioning whenever they come about, dramas, comedies. Now I would like to progress into something that’s completely different than iCarly. I would love to show people that I can do something, act serious, in a way that’s dramatic. I would like to find a role that’s like that … I’m doing everything I can to get that out there and show people what I can do in a way. And I have a recurring role on The Goldbergs right now.

A.F.: Tell me about The Goldbergs, I think I’ve heard the name…

N.M.: The Goldbergs is about a Jewish family from the ‘80s and it’s a total throwback show and I play one of the friends of one of the kids. It’s a fun gig.

A.F.: How is it balancing school and acting?

N.M.: It’s tough for sure. I actually missed the first week of school because I was shooting The Goldbergs. It sucks when you miss school and have to come back and catch up, especially in college. It’s different than high school because its so much more work. So it’s definitely a challenge and leaving when I go to an audition in L.A., I’m basically gone all day, so I come back and I’ve got all this work to do. It’s going alright, definitely behind in some stuff but overall trying to keep up with it.

A.F.: Back to what you said about the roles you are pursuing now, do you feel that you have pressure to separate yourself or prove yourself past the iCarly role everyone knows you for?

So definitely there’s no pressure on me, it’s just more if I want a future in the acting world, you definitely have to make that step from being a child actor in a sitcom to being a serious actor in movies. It’s definitely a gap I’m trying to bridge right now.

A.F.: What are some of your favorite drama movies?

N.M.: Okay, well for me drama falls under a weird, wide spectrum. I’ll just tell you my favorite movie of all time is Django Unchained. I love it, Quentin Tarantino is an idol of mine. I love Drive, Shawshank Redemption … There’s so many, but I would say those are in my top three – Drive, Django Unchained and Shawshank Redemption. Weird collection of movies — and Pulp Fiction … that’s what I’m into, the over the top but awesome epic movies.

A.F.: Out of those movies, if you could put yourself in a role, what would that be?

N.M.: Ryan Gosling in Drive. I would love that role, that’d be so cool. I would say, I think, Christoph Waltz in Django Unchained has the best role.

A.F.: What about that role attracts you?

N.M.: I would say the way he plays [Dr. King Schultz] in the movie is calm and collected, and he has control of the situation — he’s just such a boss in every situation — but meanwhile maintaining this charm. That’s what attracts me to the character. Just this sort of charismatic, ‘I can get stuff done,’ but still a charmful guy type of thing is so cool to me. I’d love to play that character.

A.F.: Tell me about your music. What attracted you to dubstep and electronic music to begin with?

N.M.: For me, it’s funny, my friend when I was in middle school showed me Skrillex and I was like, ‘Oh my gosh, what is this?’…

When I was 15 or 16, I was up in Canada shooting a movie for Nickelodeon and I was in my hotel room and I’m like, ‘I’m going to learn how to do this.’

I downloaded software and just started teaching myself and for two years I was just learning the ins and outs of this program called Ableton and it was grueling. I started off making dubstep and as I progressed, trap music came out — sort of like “Turn Down for What,” that genre of twerk, trap music genre — and I loved it, so I started messing around with it and I started getting better feedback.

I released one of my songs two months ago during the summer, called “Don’t Need You.” It’s a trap song where I rap in the intro and that kind of took me to another level with followers recognition-wise for my music. And then I released a song called “Romance” just about a month ago and that was another step for me.

N.M.: For me, I’ll listen to any genre of music. I’m a huge fan of the Neighborhood, actually, and I’ll listen to a lot of their music. Or rap music, I’ll listen to Kendrick Lamar or Schoolboy Q and I’ll find some sick beat and be like, ‘This is inspiring right now.’ I actually don’t listen to electronic music for inspiration, so I listen to genres that are all over the place, and  occasionally electronic music, but any type of music, any artist, inspires me in my creative process for making music.

A.F.: What would be your favorite electronic music artist right now?

A.F.: You mentioned that you also work on side-projects, screenwriting, can you tell me about that?

N.M.: Right now I’m writing short films with my friends that are also really talented writers that I met along the way. And I’m writing an ‘80s movie right now, an ‘80s action movie. I love the ‘80s for some reason. I love that era, so I’m writing an ‘80s Miami Vice-like shoot ‘em up movie, like Django but ‘80s, right now with my friend. I’m also writing comedy bits here and there with one of the guys here … we’re going to start some stuff coming up here.

A.F.: What are your plans for Biola — what do you see yourself doing here freshman year and on?

N.M.: Plans, hmm. I for sure want to make as much use of the film program I’m in as I can … I want to do that a lot and I think Biola is the perfect community for that. From what I’m getting the vibe so far is that people love to collaborate and that’s so cool, all these minds working together to create something really cool is going to be a fun time. That’s my main focus at Biola, to really take advantage of all it has to offer.

A.F.: Did you come in expecting your Biola experience to be something?

N.M.: Before I came in I said I’m going to drop all expectations and said, ‘All right, whatever God has for me here, let it happen. Let’s see what’s going on here.’ And it’s definitely been really awesome, it’s everything I could want in a college experience.

A.F.: Though as far as student life goes, you definitely get a lot of attention because of iCarly…

N.M.: I’m an introvert at heart … I don’t love the attention, so I more want to hang out with my small group of friends and just be, like, not a big deal. I’ve always wanted to not be the big deal.

A.F.: What’s the strangest thing that someone’s said or done since you’ve been here?

N.M.: Oh since I’ve been here? I was thinking ever…

N.M.: Ever’s better. I was at Universal Studios one time and this, not little girl, but fully-grown woman ran and jumped on my back and I was like, ‘This is not okay.’ She jumped fully on my back and was screaming and I was like, ‘I’m being attacked right now, so this is bad.’ I would get it if it was a little kid, but no, you’re a full-grown woman, this is not okay.

N.M.: Yeah, it’s like, what are you doing? So weird. I would never do that to somebody I’m a fan of — I would never run and jump up on their back.

A.F.: What do you want people to know about you?

N.M.: That if you see me, come say ‘Hey. Let’s talk.’ People don’t need to think that I’m not going to talk to them if they come say ‘hi,’ I’ll definitely sit down and have coffee with you, or talk to you. I’m a normal guy, that’s definitely the main message I’m trying to get across. I’m a normal dude in college, like you guys are, so let’s hang out.