Grappling for meaning amid distant memories of 9/11

Biola students reflect on their memories of 9/11. 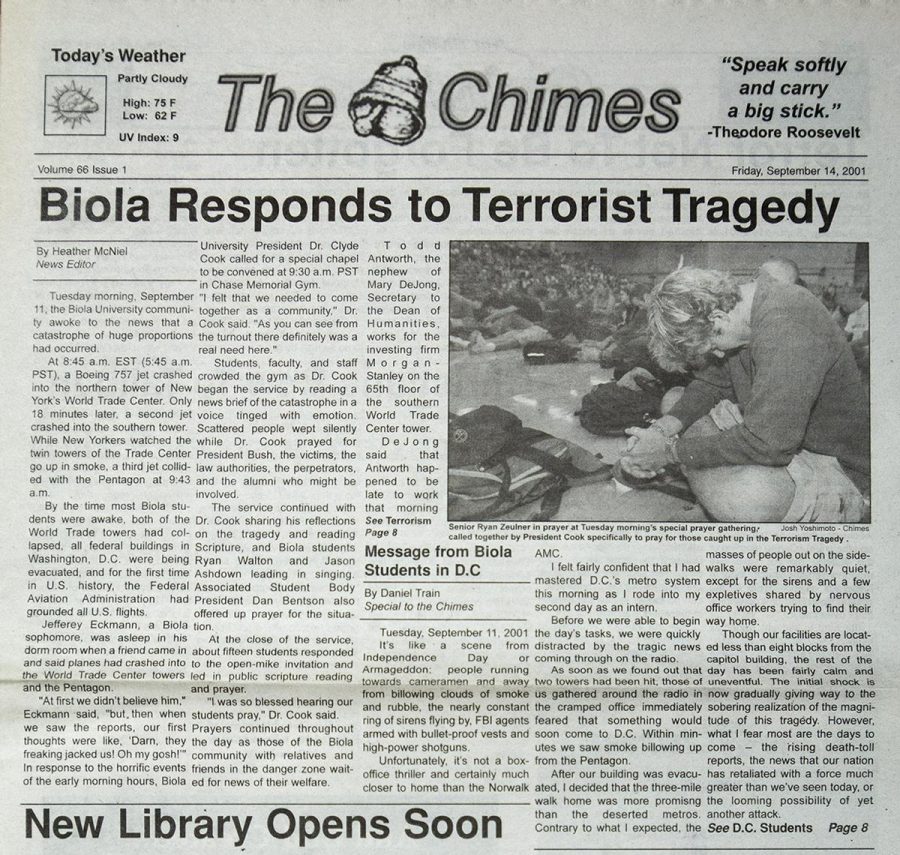 Thirteen years ago our nation fell under a haze. Americans wore pain and confusion on their faces as their sense of comfort fell with the World Trade Center’s twin towers. As time passes, today’s youth grapples with how they pay homage to an event they only faintly remember.

“I was confused, I didn’t know what was going on. Once I understood more of it, it affected me," said sophomore computer science major Abigail Koltun.

Accounts like Koltun’s can be found all around campus. On average, the Biola undergraduate student was in kindergarten or first grade on September 11, 2001. This leaves the campus as a whole with snippets of memories and limited first hand knowledge on an event that shaped the remainder of their childhood.

“I have feelings about 9/11’s after effects…Looking back, I do see how it has affected me and our culture these last few years," said sophomore computer science major Devin Bayard.

The current student demographic has more insight looking back at 9/11 than when they experienced it.

“I was in the first grade so I didn’t really understand the impact it had on our country. We are still talking about it today so obviously it is a huge deal,” said sophomore business major Jon Prichard.

On September 11, 2001 Prichard lived in a suburb of Washington D.C. where his father worked. He attended a private school close to the city along with many children whose parents worked in the Pentagon. Although Prichard did not immediately understand, he vividly remembers the events that took place that day.

“Anything and everything was getting reported [that day]. No one knew exactly what was going on, and that was what was so scary about it. I went home and remembered watching what happened on TV,” Prichard said.

Prichard recalls the effect on his community the attack on the Pentagon hurt more than a building. Many people at his church worked at the Pentagon, so he saw the effects of terrorism firsthand.

“Mr. Joyce, was a pastor at our church and also worked at the Pentagon. He was on one of the floors that got hit by the plane and he got blasted through a few walls. Another guy from my church, Mr. Berwell had 80 percent of his body burnt, his body was engulfed in flames because he  was in a bathroom hit by the plane in The Pentagon,” said Prichard.

Though some wonder how to honor those fallen and affected by 9/11, students said that the day’s tragic events should remain important to this generation.

“I think we should remember 9/11, it is definitely a part of history. We shouldn’t consider forgetting it…Negative things happen and it has reminded me that although we live in one of the safest countries in the world, terrible things can still happened,” Prichard said.

Though Bayard experienced the events of Sept. 11th, 2001 from a further distance than Prichard, his feelings were as strong.

“It was a very important event. Maybe not to me but it is to the world itself, our culture, and the families who lost people in the tragic event," Bayard said. "Because of this, as a community we should band together, comfort those who lost people, remember them, and in the same sense remember that life is not as simple as we make it out — everything technically can end in a heart beat.”