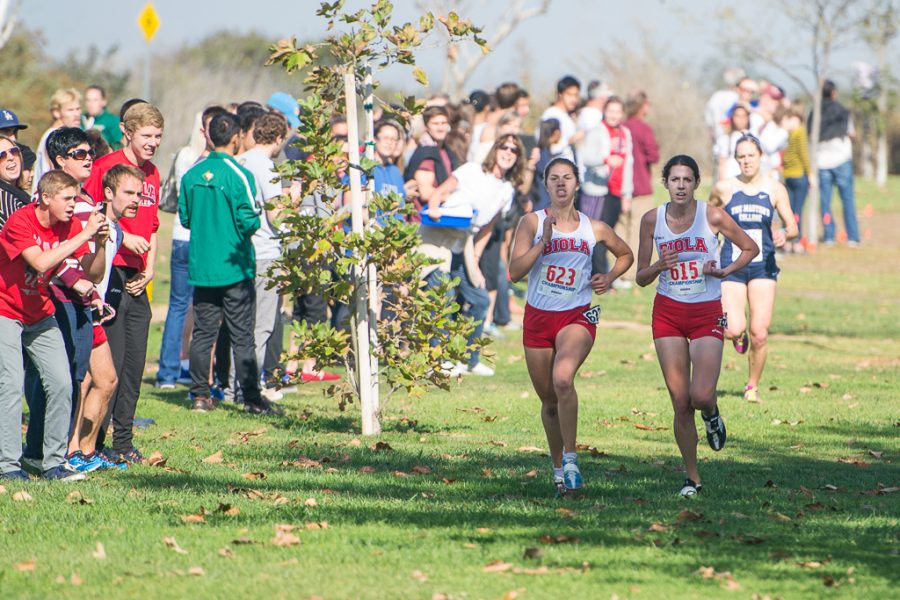 Junior Carrie Soholt and sophomore Kellian Hunt run side by side on the final stretch during the GSAC Championships in Costa Mesa. Hunt earned a first-place finish overall with a time of 17:27.15, followed closely by Soholt, who received second place with her time of 17:29.03. The women's cross country team will be competing at the NAIA National championship meet at 10:30 a.m. in Lawrence, Kansas on Nov. 23. | Ashleigh Fox/THE CHIMES

Senior Carrie Soholt and junior Kellian Hunt run side by side on the final stretch during the GSAC Championships in Costa Mesa last November. Soholt finished in first place at the Redlands Invitational last Saturday with a time of 17:02.50. | Ashleigh Fox/THE CHIMES

Biola’s two time Golden State Athletic Conference women’s cross country championship squad dominated in the Redlands Invitational on Aug. 30th with a first place team finish. Seven of Biola’s runners placed in the top 10 with the top four finishing within seconds of each other.

Senior Carrie Soholt finished first individually with a time of 17:02.50. Soholt’s teammates were close behind with junior Brooke Arvidson coming in second with a time of 17:04.29. Sophomore Lyndee Dawson’s time of 17:04.51 earned her third place. The women’s combined time placed them a full five minutes ahead of Redlands University.

Unfortunately, the men could not produce similar results and finished third out of four teams. The men’s fastest runner, senior Kevin Horchler finished with a time of 19:17.92 to place third overall.  Freshman Tim Wilson, the second runner for Biola crossed the finish line with a time of 19:52.70 to finish seventh.

The men will compete in the UC Irvine College Open on Sept. 6th. The women will not compete until Sept. 20 in the San Diego State Aztec Invitational.