“The Double” offers a bleak and hauntingly fresh dreamscape

"The Double" stars Jesse Eisenberg in a psychological thriller that blends quirks and paranoia. 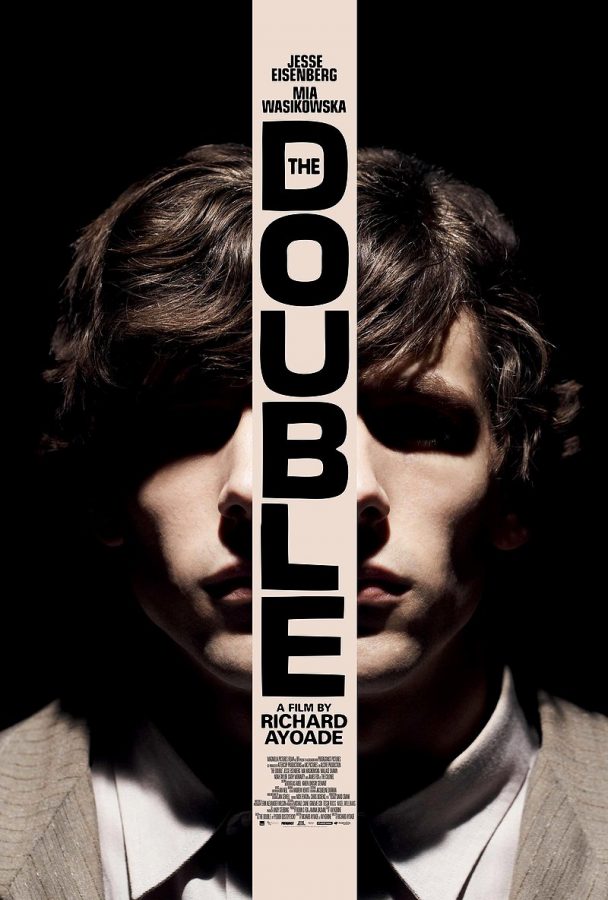 “The Double” is an amalgamation of Wes Andersonian stylistic quirks and Terry Gilliam-esque paranoia set in an Orwellian nightmare. Overall, director Richard Ayoade’s sophomore film is drab, thrilling and hilarious. The black comedy follows the painfully shy and awkward Simon James, whose new coworker James Simon — an exact physical copy of Simon with an opposite personality — disrupts every facet of his life. Jesse Eisenberg demonstrates his vast range by playing both characters, embodying each with a unique depth.

Simon James lives a life of dull routine. He gets up, takes the train to work and ogles his crush, Hannah, works a dreadful government database agency job and then goes home and stares at Hannah, played by Mia Wasikowska, through his telescope. In a city where there is a police squad dedicated to cleaning up the immense amount of suicides, Simon feels he has very little reason to live.

Simon’s life changes when he meets the new employee, James Simon. James is everything he is not — charming, confident and well-liked — and, apparently, no one seems to notice the similarity in appearance. The two develop a mutual agreement, in which Simon agrees to do all James’ work in exchange for James teaching him how to woo Hannah. The arrangement turns sour when Hannah falls for James instead, who takes advantage of her infatuation. Now, Simon must find a way to win the girl, clear his name of the trouble James has caused and somehow take control of his identity.

“The Double” draws the viewer into a futuristic, yet decidedly retro, world with a surrealistic ambiance. The musical score — a blend of traditional orchestral numbers with technological sounds such as a typing keyboard and dial-up modems — heightens this atmosphere.  Ayoade enlists a strong color palette in both the set and lighting design that externalizes Simon’s struggle to belong in society.

The suffocating and tense plot plays out like a grand psychological thriller. Ayoade’s background in comedy helps find moments of irony and absurdity within the screenplay, bringing a darkly comic tinge amongst the paranoia.

Jesse Eisenberg easily gives his best performance since “The Social Network.” He fully embodies both the characters of Simon James and James Simon, imbuing each with a personality, quirks, speech pattern and movements uniquely their own. Their scenes together as they banter, fight and share vulnerable moments are truly incredible, especially considering the complete lack of CGI — a challenging feat for all involved in the filmmaking process.

For all its positives, the weakest aspect of “The Double” is its trippy narrative. Based off the novella by famed Russian author Fyodor Dostoyevsky, the story focuses on a psychotic character study of loneliness and alienation in a manufactured society.

Simon’s struggle is easy to become emotionally invested in — he is a true-blue underdog — but the third act’s movement into a revenge plot becomes slightly unfocused due to a late reveal concerning the nature of the doppelganger. Audiences will wrestle with the meaning of Simon’s final grasp for control, which culminates in a bleak and nerve-wracking conclusion.

Despite this shortcoming, “The Double” uniquely showcases Ayoade’s singular voice in cinema.  Audiences will enjoy being wrapped up in his offbeat world.