Office of Spiritual Development explains the payoff of end-of-semester fees. 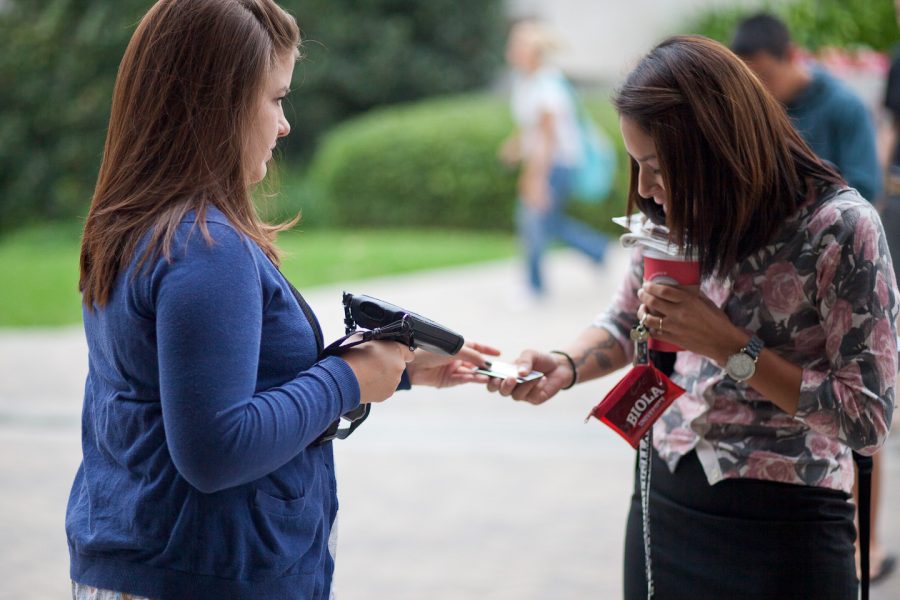 If one were to walk near the auxiliary services building during the week before finals, they would probably notice a large line of people handing in their chapel makeup forms. This informal Biola custom is practiced by all students who do not attend the required 30 chapels in the semester. Unfortunately, these students are also required to pay a $1 fee with every makeup form they submit.

And these fees add up.

Many students opt to pay the $1 fee for chapel makeup forms, but they can only make up 15 chapels per semester. If they do not attend at least 15 chapels in person, they are required to pay a $375 fine.

Lisa Igram, from the office of Spiritual Development, said Biola would rather not charge individuals for the chapel requirement.

“We would rather not fine anyone. But often, when you are required to do something, you automatically don’t want to. We know there has to be some sort of consequence if we are going to uphold this as a Biola standard. It’s not our favorite thing, but we realize it’s necessary,” Igram said.

In fact, the $375 fine was recently introduced in the Fall 2011 semester as an incentive to get students to attend chapels.

“After several years of research, discussion and trying several methods to help students meet the Spiritual Development requirement, a $375 fine was instituted in Fall 2011,” Igram said.

According to Igram, the fine is working effectively in getting students to attend chapels.

During the Fall 2011 semester, 336 students were fined. This number dropped to 141 students during the fall 2012 semester. This is a 58 percent reduction in the number of students unable to meet the chapel requirement.

Biola has an explanation for chapel requirements on its website:

“Because it is hard for us to present ourselves to God regularly, we help you by requiring it, just as we require you to take courses and do coursework — which are also spiritual disciplines sometimes hard to maintain,” the website states.

The website notes that there are up to nine weekly chapels and various departmental chapels each semester, which adds up to over 175 chapel choices.

Even with over 175 chapels available throughout the semester, students struggle to meet the minimum requirement for various reasons.

Whitney Luigs, a senior sociology major, was only able to attend three weekly chapels because of scheduling conflicts, and even those were inconvenient.

“I think the chapel staff are all wonderful people with hearts for counseling and ministry,” she said. “They are willing to listen to students and be there with them. I had a positive experience with chapel, but as time has progressed, it has been more difficult to attend them.”

Matthew Olson, a sophomore business major, has never completed a chapel make-up, but still sees a problem with the fine.

“So far at Biola I’ve completed all my chapel, but I do see a problem with the fine,” he said. “I can understand there being a requirement and needing to fulfill it, but a fine should not be the way to do it because people already pay $40,000 a year to go to Biola and should not have to pay a fine on top of that.”

For senior biblical studies major Zach Arnold, missing the final chapel because he was sick meant having to pay the $375 — even though he attended 14 of the 15 required chapels.

“I like the fact that we have chapels and accountability, but I would actually say it’s wrong to fine us money for that because I don’t think a monetary amount can achieve what they want to in chapel accountability,” Arnold said. “If chapel is for spiritual growth, paying money is not going to help me grow spiritually.”

Igram mentions that students who need to pay the $375 fine are able to opt into a one-day retreat program to lessen the payment by $250. The remaining $175 pays for the retreat.

But what about the students who don’t attend the retreat?

According to Igram, when students do not attend the retreat, the money from the fine is placed into the general university account. Some of the money is used to make chapels better — such as by flying in speakers from different parts of the country.

She goes on to mention that the $1 fee required for each chapel makeup is considered a human resources processing fee.

“Because of all the human resources time required to process all of those makeups, we needed a fee to cover it,” she said.

The fine invites students to consider placing a higher value on chapel attendance for future semesters. It also serves as a pause for students to think about going to chapel rather than having to pay the fee, according to Igram.

“And that pause is a higher value for us. So it’s processing and to promote physical presence,” Igram said.

For many students, understanding what the money is used for is extremely beneficial because it shows Biola is not simply money-hungry.

“I know people are going to gripe about a fine being made, but there’s 16 weeks in a semester, and going to one a week is all you need to do,” Olson said. “There are plenty of benefits in going to chapel and one a week is worth it.”