Hormel/Panko and Storm each win AS and SMU elections with 54.6 percent of vote 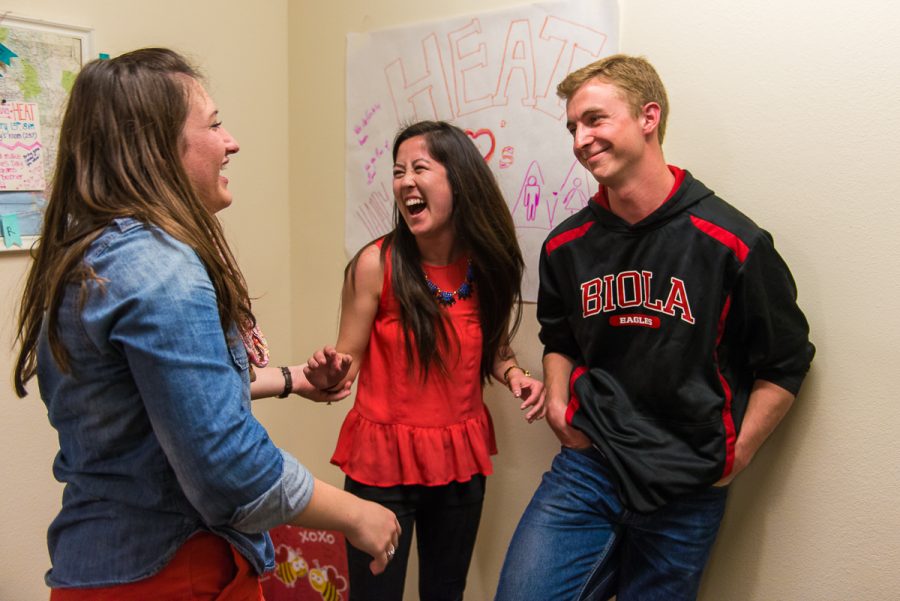 Juniors Taylor Crouch and Ashley Panko wait in anticipation as sophomore Tyler Hormel listens to the results of the AS elections. | Olivia Blinn/THE CHIMES

Tyler Hormel, Associated Students presidential candidate and sophomore accounting major, held in suspense the small group crowded around him as he listened to AS president Evan Tan over the phone. His neutral expression gave no indication that Tan was telling him the news he and his vice president candidate junior marketing major Ashley Panko had been waiting for all night.

“He [Tan] drew it out. He said, ‘Thanks for being a part of the election process, blah, blah, blah, I look forward to seeing you in training. He was a little cruel,” Hormel said.

Hormel and Panko won with 973 votes, receiving 54.6 percent of the ballots in their favor. Junior business administration major Evan McGee and his vice presidential candidate Laura Daronatsy, a sophomore journalism major, followed behind with 29.01 percent of the vote. Coming in third, Andrew Bustos, a senior biochemistry major, and junior social science major Brittany Woods received 16.39 percent of the votes.

The packed upper lobby of Hart turned from quiet anticipation to an uproar of cheers from Hormel and Panko’s supporters as the victorious duo was introduced. Both expressed their gratitude to everyone present, acquiescing the chorus of speech requests.

“I just want to say thanks so much for all your support and how much I see Christ in every single one of you. It’s just awesome to see all you guys supporting us and we couldn’t be more thankful for all you guys did this week,” Panko said.

Amid the celebration, relief was a common theme throughout the campaign-weary team.

“Honestly, I was expecting to go into a run-off just because it didn’t seem probable to have three candidates and have one person get 51 percent of the votes. It’s a huge blessing to not have to put the campaign teams through that again,”  said Taylor Crouch, campaign manager for Hormel and Panko and senior music in worship major.

Hormel announced that the team would be heading to In-N-Out Burger, inviting all to join them as they continued celebrating.

Junior Brittany Woods and senior Andrew Bustos sit in prayer with friends after hearing the results of the AS elections. Bustos and Woods received 16.39% of the total votes. | Kalli Thommen/THE CHIMES

After partaking in pancakes cooked by the candidates, campaign supporters for Bustos and Woods sat in a circle on the floor of the Thompson Hall lobby, praying as they waited for the results. The candidates wore pajamas, saying they wanted to relax after a long and stressful week.

The phone call came mid-prayer, and the supporters sat nervously as the two took it. Upon returning inside, the team continued in prayer before Bustos and Woods announced they had lost.

“I’m not as disappointed as I thought I would be,” Woods said. “I’ve been in leadership a lot in my life and I’ve never lost an election before, so that was one of my concerns going into this. … We can’t always have what we want, and I believe that sometimes God has to show us that.”

Bustos said he was glad the election did not end in a runoff, as in last year’s Student Missionary Union election. He also reflected on his AS experience and what he hopes to do in the future.

“I’ve been praying over other positions in AS, and I don’t know if AS is the organization that God wants me to serve in right now, but I definitely want to give back to this community that has poured so much into me,” he said. “I didn’t see myself here a year ago. When I ran for Bluff senator, I was running against two other opponents — I didn’t even expect to get that.”

Woods said she saw the race as an opportunity to redeem the elections process at Biola.

“One area that Andrew and I did win in was we changed the tone of elections, which is what we set out to do,” she said. “For us, elections wasn’t about playing this dirty game of trying to bring down the other teams and exploit their flaws, but elections for us was about unifying Biola as a university.”

Junior Evan McGee embraces running mate sophomore Laura Daronatsy as she interviews with a reporter after hearing the results of the AS elections. | Ashleigh Fox/THE CHIMES

Upon hearing the results amid a game of Catch Phrase in the Sigma Hall lobby, sophomore journalism major Laura Daronatsy expressed her gratefulness to participate in the election.

“I think that we’re just really thankful that we ran a good race. We’re thankful for the opportunity to work together, get to know each other better and get to know the school better,” Daronatsy said.

“I think I am very thankful for my campaign team. We had a lot of people that were really dedicated and did a lot of good work. I think we ran the best campaign, no matter if we won or lost,” McGee said.

The candidates’ campaign manager, sophomore business major Jesse Barrett, reflected on the team’s successes and mistakes throughout the race.

“It was a hard-fought battle. We put a lot of effort into this,” she said. “I guess something that we could have done better is paid more attention to posting policies so we didn’t have as many penalties.”

A group of friends surround SMU candidate Cody Storm, a sophomore international business major, while on the phone with current SMU president Roddy Garcia. Storm is the SMU president for the 2014-2015 school year. | Julia Henning/THE CHIMES

Sophomore international business major Cody Storm walked into his election party after playing basketball and kickball. After a time of group prayer, Storm’s phone rang. He stepped outside to receive the call from current Student Missionary Union president Roddy Garcia. When he walked back into the classroom full of praying, nervous supporters, Storm took the podium and thanked his campaign team for their work and informed them of his win.

“[I feel] really excited — super happy. I’m glad everyone’s here … That’s the whole part of my campaign — getting more people [involved], so I love to see everyone here,” Storm said.

Tomorrow, he will start building his vision for the year — thinking practically how it will work out for the board of directors, Storm said. He will start thinking about which people he wants in each position.

Over in Hope Hall in the secluded fourth floor lobby, junior sociology major Harlow tearfully explained to her campaign team and friends that she lost the election.

She felt only relief and peace, she said.

“This is God’s will and I trust him in that. Character development is more important than any one position I hold in a university,” Harlow said.

A total of 1,853 ballots were cast by the 10 p.m. cutoff time, meaning nearly half — 46.48 percent — of the eligible student body voted, compared to last year when just 38 percent voted. Voting numbers greatly increased last year when AS took the process online, vice president of marketing and communications Richie Gowin said.

“The system was online, it was faster, students could vote twenty-four seven,” Gowin said.

Even though elections were two hours shorter in order to respect candidates’ time, there was still an 8.48 percent increase in the number of students who voted. Gowin speculates more students participated because of the streamlined online system and the return of elections chapel.

“We expect to see an increase every year of voting for the next few years until it starts to plateau,” Gowin said.