Biola Confessions might be misusing the practice of confession. 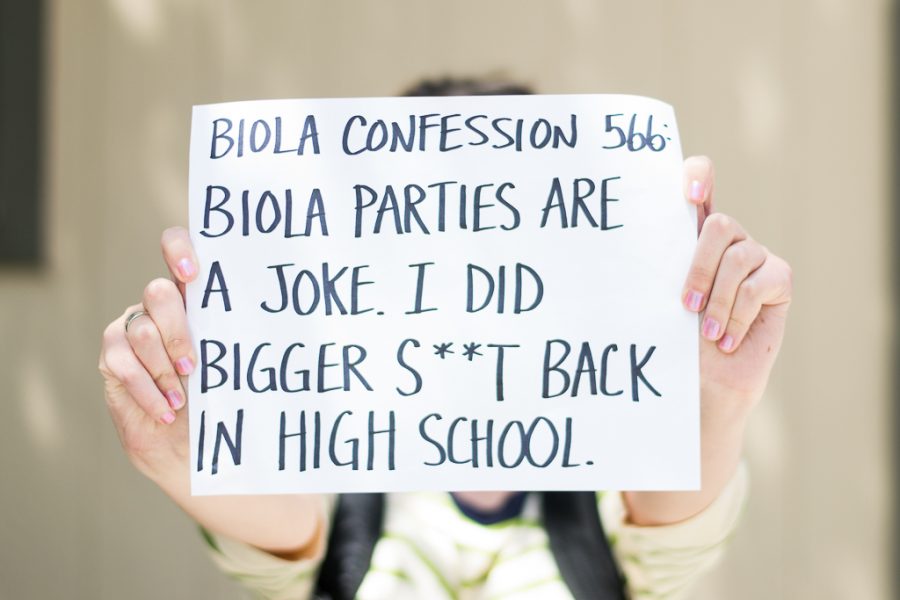 The Biola Confessions Facebook page has served as a place for Biolans to share revealing things about themselves, but some think it has gone too far. | Ashleigh Fox/THE CHIMES

Biola, like every university, goes through fads. Biola Confessions is a special fad: It died, but now it’s back. More than 400 people are fans of this Facebook page that features anonymous comments from students complaining about campus, whining about not being noticed by their crushes, and, worst of all, bragging about breaches of contract.

Whether it was born out of an attempt at subversive fun, or full-on spiteful hate, is unclear. But Biola Confessions has become a dirty, immature and cowardly window into the lives and hearts of some students. People who boast crude and distasteful comments should be ashamed — and if only it would stop at the anonymous posts.

But it goes further, with people commenting with their name attached in agreement to some of these things. Most of the things posted are put there to get a rise out of the people that do read and comment. Comments only fuel the fire and make the situation worse.

Biola strives to be a family, to create a community that helps one another grow in Christ and in knowledge. Would you log onto Facebook and rant about your mom — calling her selfish and lazy because she didn’t do your laundry? Of course not. So why is Biola any different? Biola Confessions tears down our community, and it tears down the Church as a whole, since we’re all a part of it. Just as you wouldn’t betray your family by airing your dirty laundry on social media, you shouldn’t stab Biola in back that way either.

Remember, the practice of confession is wonderful. It is healthy for someone struggling in sin to confess that habit to God first, and to bask in the renewed knowledge of his grace. It can also be part of the healing process to confess that sin to a small group of fellow Christians who can pray for and help one deal with the effects of that sin. Although confession has sometimes been skewed to mean doing whatever one sees fit as long as they ask for forgiveness afterward, it was not intended this way and can be a part of a healthy spiritual life.

Rather than seeking renewal through confession, the posters on Biola Confessions are looking for affirmation of sin — for proof they’re not the only ones sinning. There’s something to be said about safety in numbers. Confessors who choose to share these dark secrets are anonymously making these sins known to the entire community — and then checking to see how many likes or comments their post has amassed. When students see that someone else is “just as dirty” as they are, they feel validated in that sin. This is dangerous, folks. No matter how common the sin, we should never feel safe in doing it, because sins are an abomination to God and punishable by death. A true friend may empathize or sympathize with our sins, but will never commend us on it. Instead of seeking out validation for the sin that so easily entangles, we should seek out true friends and supporters who will encourage us to crush the sin through the power of Christ in us.

As cliché, overused and misused as this phrase may be, WWJD is still a very valid question. We are called to think, act and speak like Jesus. We are his image bearers, his chosen people, a holy nation, a people belonging to God. Nowhere in the Bible does it say “act like Jesus in public, but go ahead and sin in private — then, be sure to anonymously post about it so all your brothers and sisters in Christ can see it, laugh about it and participate in it.” No. Instead, it calls us to imitate the perfect Son, who was made in our likeness and was obedient even to death so that we could be called sons and daughters of God. It calls us to be holy because he is holy. And it calls us to hold each other accountable for our sin — not to use it as the brunt of jokes or to secretly post it so we can be in our sin and not suffer the repercussions.