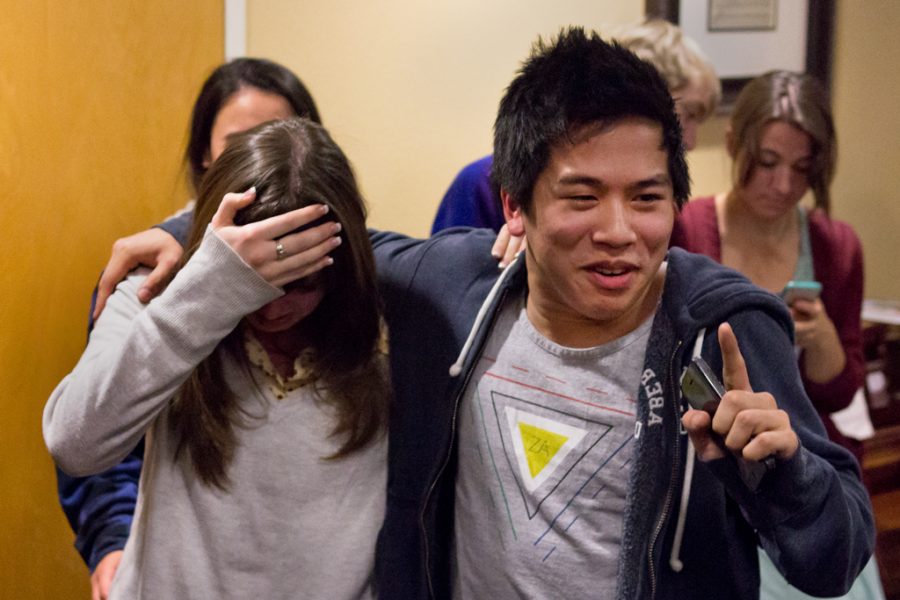 Junior Evan Tan and sophomore Becky Gallacher celebrate winning the AS presidential election by one vote with their campaign team and friends after receiving the news by phone in Hart Hall early Friday morning. | John Buchanan/THE CHIMES

Junior Evan Tan and sophomore Becky Gallacher celebrate winning the AS presidential election by one vote with their campaign team and friends after receiving the news by phone in Hart Hall early Friday morning. | John Buchanan/THE CHIMES

In the closest Associated Students election ever, junior Evan Tan and sophomore Becky Gallacher won the 2013 AS Elections by a single vote — 763 to 762.

When senior Richie Gowin, AS vice president of marketing and communications, was interviewed for the Chimes, he was asked: One vote?

“That’s why it took so long,” he said, referring the 30-minute gap between the close of online voting and the calls to anxiously waiting candidates.

The AS constitution requires only a simple majority to win the election, which makes it possible for one vote to completely change things. Tan acquired that simple majority with 50.03 percent of the vote.

The Student Missionary Union elections will proceed to a runoff, according to Gowin.

Voting continues tomorrow from noon to midnight on the same website.

Tan, waiting in the Hart Hall lobby, stepped out to take a call and came back without results. Gallacher, left behind, was in tears as she waited.

Minutes later, there was a second call — this time with the almost impossibly close win.

“Guys, we won by one vote!” Tan screamed to a hushed crowd, who immediately erupted into cheers.

Tan and a sobbing Gallacher held each other amid a crowd of supporters, many of whom were visibly emotional.

“I’m just so happy that Becky won, she deserves this,” said freshman Madison Hughes, her eyes red with tears.

Tan was shocked by the results.

“I’m overwhelmed by the love of God. He knows our hearts and he knows what’s good for us, and I feel so gross right now,” Gallacher said, admitting she felt ready to vomit right up until the announcement was made.

After the excitement subsided, the group of 47 supporters joined Gallacher and Tan to pray for their opponents.

Two dorms over — in the Hope Hall lobby — junior Megan Beatty was notified that she and running mate sophomore Cody Nord lost by one vote.

Standing outside the second floor lobby of Hope Hall, sophomore Cody Nord eagerly awaits the news with junior Megan Beatty as she speaks with senior Chris Yim on the phone. | Emily Arnold/THE CHIMES

Their supporters waited impatiently while the candidates took current AS president Chris Yim’s call out in the hallway. The silence was broken with scattered speculative whispers about Beatty and Nord’s facial reactions.

When Beatty and Nord emerged from the doorway, they stood side-by-side and announced the loss to their supporters. The majority of the crowd seemed convinced that Beatty was joking, though she insisted that she was telling the truth.

"I'm being serious, I wish that someone would be like ‘Hah! Psych!’” Beatty said to her shocked supporters.

Beatty was surprised at the unprecedented closeness of the vote.

“It's bizarre. This is the one outcome that we always joked about happening but it was so absurd that we never thought that it actually would,” she said.

Despite the disappointment, Beatty trusts that the loss is for the best.

“God is sovereign and if this isn't what he has for me and Cody then I don't want it, I want his plan more,” Beatty said.

The campaign team, though disappointed, took notice of Beatty and Nord’s gracious attitudes.

“Watching how Megan and Cody are reacting to this whole thing makes it all worth it because it really is hard to react in a way that is glorifying to Christ and to [others],” said junior Matt Gugel.

Junior Stefan Carlson said he was still processing the results.

“I’m doing alright. I know that everything works out according to God’s plan,” he said.

“I think going in, we might have had a few, but I think once we saw that there were four great campaigns all being run well, it was clear that it was up in the air for anybody.”

After many changes to the elections process, including the ability to vote online, this year saw nearly 200 more votes in the AS race than last year.

“A lot of our normal physical presence was limited this year,” Gowin said. “But we still had higher voting numbers than in previous years by a measurable amount.”

The one-vote margin stands in stark contrast to last year’s 102 vote difference between the two candidates.