President Barry Corey discusses why Biola is joining the lawsuit and continuing the conversation about human sexuality. 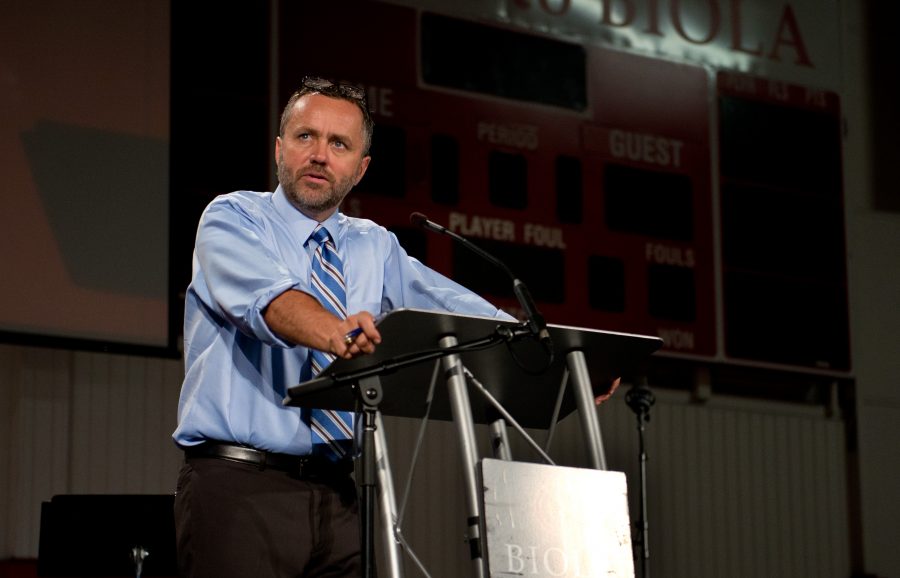 During chapel on Friday, Aug. 31, President Barry Corey announces his plan to continue the conversation about human sexuality throughout the year. | Olivia Blinn/THE CHIMES

After a quiet summer, the bustle of academic life has returned to campus, a welcome sight indeed! I trust that the summer season provided a change of pace, replenishment of energy and nourishing of the soul. I feel recharged and refreshed and ready for a wonderful year ahead.

As we begin the semester, there are two important issues that have been on my mind and I want to share them with you.

First, some of you know that last week Biola initiated litigation over a federal rule by the Department of Health and Human Services. Basically, we have filed a lawsuit jointly with another Christian college in Indiana. This federal department recently stated a new definition that organizations like Biola are not “religious” and the implications on this could be enormous in our fulfilling our mission with integrity. This is not an election year ploy on our part nor is it a Republican or Democratic statement. Biola has not and will not be that way, politically identified or endorsing of a candidate. Hear me on this. It is a statement of conscience that when it comes to the matter of our defense of life’s sacredness and religious freedom, we don’t believe the government should change the rules.

The issue at the heart of this lawsuit is that as a religious organization in the United States, we should be able to make decisions based on our Christian beliefs. The Department of Health and Human Services is defining religious institutions so narrowly that it does not include Christian colleges or anything but a church or a denomination. We believe this is one of those moments to speak up, as our religious liberty is under fire and it could have repercussions in other areas of
our mission as a Christian university.

We are not alone on this, and neither is this a Protestant or an evangelical matter. It’s a religious liberty matter. Twenty-five similar federal suits have been filed by organizations like the University of Notre Dame, Wheaton College, Geneva College, The Catholic University and Colorado Christian University.

We’ll be having an open forum on this issue if you desire to know more. The forum is scheduled for Tuesday, Sept. 11, from 3 p.m. – 4 p.m. in the Caf Banquet Room.

Conversation about human sexuality to continue

Second, as returning students will remember, during our final chapel in the spring I spoke to you in response to the end-of-the-semester conversations on human sexuality and same-sex attraction. Over the summer months, we’ve begun planning for this year’s conversations. I have asked our vice president for student development, Chris Grace, and our provost, David Nystrom, to chair the planning team for these conversations.

As a reminder, during that May 18 chapel I shared five core commitments that will guide our efforts to talk about sexual identity issues.

Here is the gist of what I said:

1. In order to legitimize one side or another, we will not reinterpret Scripture as it was originally intended and has been viewed in orthodox Christian traditions over the centuries.

2. We will have more intentional conversations this year and beyond on the huge and complex issues of human sexuality.

3. We will provide students a safe place to ask questions and give perspective on their sexual identity perspectives, but not a permissive or activist space.

4. We will allow for voices to be heard who may not be in alignment with our position regarding same-sex behavior and advocacy.

5. We will be open to think at increasingly deep dimensions about sexual ethics guided by God’s sovereign Word rather than our own desires.

Plans to hold serious discussions in the coming year

I’ve read, thought, reflected and talked about this issue in the intervening months.

I had a long conversation in July on the East Coast with several Biola alumni per their invitation to listen to them and for me to talk through how we’ve been processing this question. It’s safe to say that none of these Biola graduates would describe himself or herself as heterosexual in orientation.

If we are going to allow voices to be heard who may not align with our positions, as I told you in the spring, we need to be willing to listen in order to understand better how to respond.

We’ll have some important discussions and forums this semester and next semester, and some serious discussion on biblical views on sexual ethics. What does the Bible say or not say?

You can expect to hear in the next four weeks on the conversations planned for this year.

Please keep these two issues in prayer throughout the semester. Again, welcome to the 2012-2013 academic year at Biola, a year I believe God will use this university in unique and powerful ways as we seek to understand his heart for proclaiming good news in a changing world.