Biola baseball finds ways to worship God on and off the field. 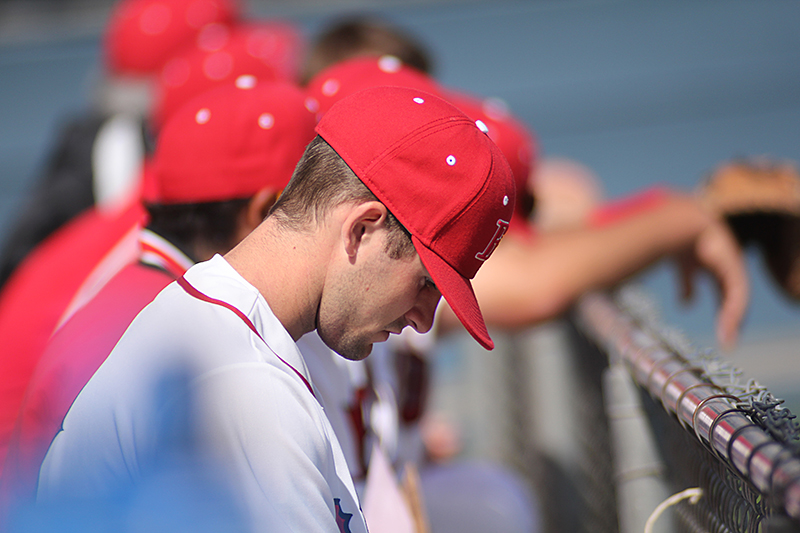 The Biola baseball team is not only a group of talented athletes, but also a visible sign of godly character on and off the field. Prayer is a major part of the team’s routine as God remains the purpose for each player to play every game. | Job Ang/THE CHIMES

“There are quite a few godly men on the team who are seeking after God,” leftfielder sophomore Benji Sutherland said. “I know a few lives that have been changed while at Biola. They were involved in stuff they shouldn’t have been, and they gave that up because they wanted to be closer to God.”
Outside of the batter’s box
Junior Drake Fages leads the Eagles in almost every hitting category and he leads the Golden State Athletic Conference in slugging percentage, runs scored, runs batted in, doubles, total bases and is second in hits and home runs. Even though he outperforms most on the field, that isn’t his most important contribution to the team. What he does in the dugout and off the field is far more beneficial to one of the top teams in the GSAC.

“He has good character,” junior Mac Sullivan said. “He is constantly putting himself last, behind everyone else.”

When centerfielder, junior Vinnie Fayard went down with an injury during a game on Monday, April 11 Fages was spotted at the edge of the outfield grass kneeling and praying for his teammate. That kind of leadership speaks more about the player Fages is rather than the four RBIs he tallied to win 7-6 over Vanguard University on that day.

Sutherland is one of few starting left fielders that you can name who want to be preachers in their life after baseball. Sutherland not only hits for a high average, he plays stellar defense and leads the team with 13 stolen bases and he is a biblical studies major. He loves playing baseball, but his desire to preach God’s word stands out as he is midway through his playing career at Biola.

“I don’t know what life after baseball has for me,” Sutherland said. “I feel I could do both, play ball and still lead in the church somehow, But God holds the future in his hands, so I’m just going to trust him.”
God revealing himself in the midst of competition
Vinnie Fayard’s involvement in athletics has not overcome his spiritual life. God has a hold on him that baseball can’t compete with.

“I always am trying to look at what I can do in order to make my faith stronger. Whether it is with baseball or just life, I am always looking for new ways to serve God,” Fayard said. “This is my third year playing baseball for Biola and without the baseball team I wouldn’t be as close to God as I am today.”

His faith can be seen on the field. After a clutch hit, or a strong defensive play you can sometimes see him raise both hands, fingers pointing to the sky, thanking God for the ability to make the play.

“I’m always talking to God when I’m out on the field,” Fayard said. “Each swing, each throw and each catch, God is at the center of my game and without him I wouldn’t be where I am today.”

This also goes for sophomore starting pitcher Nick Turner. Partially credited with helping to turn around Biola’s pitching staff, Turner never forgets who he plays for.

“I play for God. One of my bracelets says ‘whatever you do’ on it … reminding me to play for God,” Turner said. “I get most satisfaction when I see fellow teammates praying and praising God.

Before each time he toes the rubber to pitch, he gently kneels down behind the pitching mound, covers his face with his hat and prays. Even after games in which he doesn’t play, he prays.

“I pray before every inning, kneeling down, to show people that its not about me. I pray that he keeps everyone healthy and blesses my outing,” Turner said. “I am sure to thank him for the opportunity to play baseball at this level. It’s such a blessing and I love every minute of it.”

This is not behavior unique to Turner, however. Other players are finding ways to worship God before and during each game.

“Before this season, I never saw Kevin [Ryan] kneel before an inning and now
he does it every time,” Turner said. “That’s been my favorite memory this whole year
being on this team.”
For the love of the game
Baseball is a game and is meant to be fun. That is one of the ways God has blessed the Biola baseball team — he never lets the players forget why they love the game they do.

Fayard said, “I can’t speak for every player but being involved with these guys and coaches is the best thing that has ever happened to me.”

It might be a team full of spiritual leaders and men living for God the best they can but it is also a team that is built on friendship and having fun with each other.

“We have too many characters and not enough plot,” Turner said.