An enterprising student has started up a line of DBC clothing in response to Biolans' love for President Barry Corey. 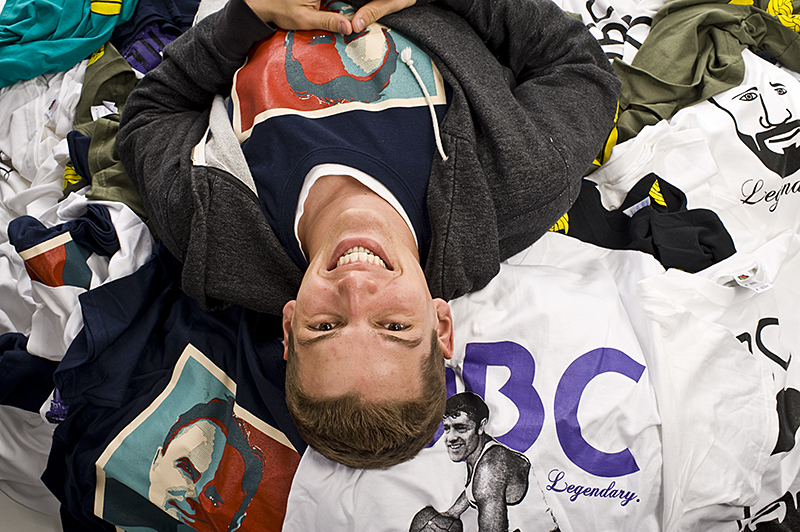 Junior Evan Arnold is the designer and businessman behind the newly released DBC shirts being sold to Biola students. The tshirt effort is not only to honor the university president, but also help to fund Arnold’s trip to France in May. | MIKE VILLA/THE CHIMES

If President Barry Corey, otherwise known as DBC, keeps crossing your mind, maybe it’s because you’ve been seeing his face plastered around campus.

But, it’s probably not exactly the friendly face you’re used to. Just two weeks ago, junior Evan Arnold started selling DBC clothing depicting our very own Corey in a whole new way. On one shirt, his face resembles the Obama hope design, and on another, he is towering over a city skyline playing basketball.
Inspiration strikes at Horton all-hall
During a Christmas all-hall in Horton Hall, Arnold was celebrating the holiday season –– mingling with friends and snacking on seasonal treats –– when out on the lawn arose a commotion. Arnold couldn’t help but notice a rise in the level of exuberance among his fellow residents. And who should appear but Corey himself –– though the excitement that filled the air made it seem like Santa Claus had just arrived at the all-hall party.

Arnold recalls how excited everyone was that Corey showed up at their very own all-hall. To Arnold, it was an understandable frenzy, but its not DBC’s role as president that makes him so popular at Biola –– it’s that he is so approachable, and gives off such positive energy whenever he enters a room.

Arnold recalls saying, “Wow, people really love DBC. This dude should have a clothing line after him.” Despite it being a joke at the time, the idea stuck with him. He started to wonder if people would actually buy DBC shirts if he made them. With high hopes, he took the necessary steps to get this inspired clothing line rolling.
Pursuing design perfection
New to graphic design, Arnold quickly taught himself how to use programs like Adobe Illustrator and Photoshop. He spent his whole Christmas break developing shirt designs and asking others if they’d buy them.

“The Obama one I designed four times before I was happy with it,” Arnold said. “The chain one probably took about 28 hours since I drew it by hand, and the basketball one took around eight hours. Design it. Trash it. Design it. Trash it. Everything had to be precise. I have an eye for perfection.”
DBC clothing line to expand
Arnold initially came up with three main designs, but he plans on releasing more. A fourth design just arrived on Saturday, March 5, and three more will come out in the near future. Arnold has also considered having a design competition to get Biola students more involved, since in the last two weeks, many have shown a great interest in this clothing line.

“We’ve sold in the 40s and hope to sell upwards of 700,” Arnold said. “With the right marketing and creative influence, we can totally do it. We just have to paint Biola DBC.”

“At what other university is it cool to wear a shirt of your president in good ole clean fun?” asked senior Boye Fajinmi. “I think that says a lot about the community here at Biola University.”
How to snag a shirt
To further promote these shirts, Arnold recently launched a website for DBC Clothing, though the site isn’t fully functioning yet. Eventually, customers will be able to purchase shirts online –– but at this point, the website simply has the designs on display and information under “how to cop one.”

The options are as follows: Either, snag one from the guy outside the Cafe when he decides to show up or text (925) 719-1855 the design and size you want and a customer service representative will bring it to your dorm room.

With delivery straight to your room, it’s evident that customer service is very important to Arnold, Fajinmi, Arnold’s business partner, and junior Steven Haddadian, who is helping with promotion.

“Evan came to me with a good idea and I thought it was amazing so I thought, ‘Let’s make it happen,’” Fajinmi said. “I have a lot of faith in Evan and what he’s about so I gave full support.”
Clothing to pay for Cannes trip
Shortly before the idea to launch a DBC clothing line came to him, Arnold noticed a poster in the Production Center for Creative Minds in Cannes, a program that provides participants with internships at the Cannes Film Festival. On their website, he watched an informational video, in which he noticed the familiar face of Fajinmi. Arnold immediately contacted and met up with Fajinmi, the current executive assistant to the CEO of Creative Minds.

With impressive applications and Fajinmi on their side, Arnold and 10 other students successfully secured internships through Creative Minds. From May 9 to 23, they will attend the Cannes Film Festival in France as interns for companies such as Fox Searchlight, Paramount and Universal.

DBC Clothing was created solely to cover the cost of this trip to France, and seeing as this will be an expensive excursion, Arnold hopes the clothing line will gain momentum and popularity.