Scott Derrickson, Christian filmmaker and Biola alum, shares in chapel on the topic of suffering, reminding students that God suffered too. 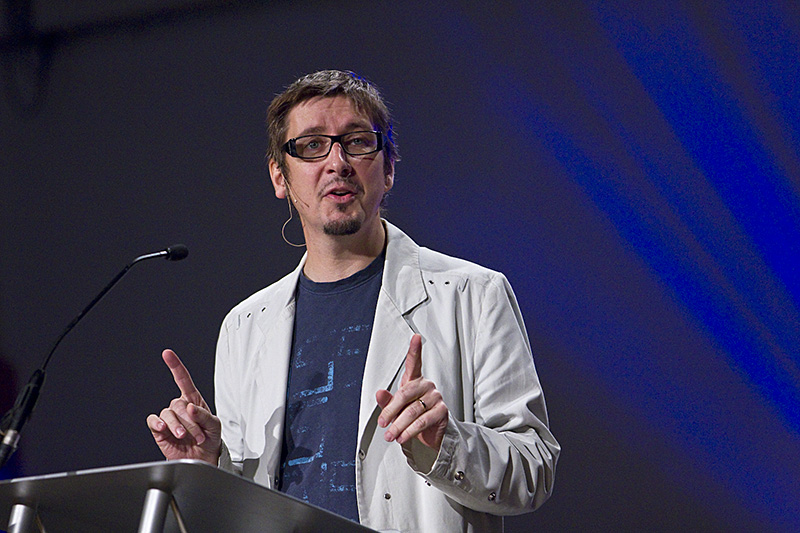 On March 4, Biola alum Scott Derrickson, known for directing the film, “The Exorcism of Emily Rose,” spoke in a chapel about suffering.
Speaker connects to Christ’s suffering
“I was interested to hear his perspective on his career as a Christian filmmaker,” freshman Victoria Henderson said. “He also had interesting points on suffering and how we can connect that with Christ’s suffering.”

Derrickson shared about his personal journey in Friday’s chapel. He said he did not come to Christ until high school, and when he did become a Christian, he was part of an extremely conservative church.

“Coming to Biola, I was coming to a liberal school,” Derrickson said.
Wrestling with the problem of evil
While Derrickson was attending Biola, the problem of suffering was at the forefront of his mind. He struggled with the idea that God could be a loving, gracious, peaceful Being, yet allow suffering and death continually grasp the lives of humans.

“There is mystery in the problem of evil,” Derrickson said.

Derrickson said he majored in film and humanities at Biola. He had a passion for studying the human condition in addition to film. While at Biola, Derrickson learned about the spiritual realm.

“I found myself exposed to a world of ideas,” Derrickson said.
Expanding his ideas
While struggling with the idea of evil existing alongside God, Derrickson studied how great minds like C.S. Lewis and St. Thomas Aquinas viewed the problems of evil and suffering. He read literature on the subject that helped him understand and come to his own conclusions about evil.

“My mind began to expand and its been expanding ever since,” Derrickson said.
Examining the origin
By understanding the origin of evil, Derrickson could eventually come to terms with the problem of evil.

“Evil is not something God created,…It is the absence of good, not a thing in itself,” Derrickson said.

By coming to peace with the situation of evil, a fallen world, and a sovereign God, Derrickson said he found solace in his Christianity.

“I struggle with my own doubts, but Christianity still holds up under all of the scrutiny,” Derrickson said.

Derrickson said knowing more about the origin of evil helps him in his job as a writer and director of horror films because he can find beauty in the greatest horror, which is the crucifixion.

“An individual who embodied the whole of sin… Jesus Christ,” Derrickson said.
God suffered too
In Friday’s chapel, Derrickson analyzed the story of the garden of Gethsemane. The story found in Matthew 26:36-46, Luke 22:39-46 and John 17 accounts the time Jesus spent praying before his crucifixion. Derrickson said that Jesus wasn’t praying because he was afraid for physical reasons, but was afraid for spiritual reasons.

“Here was Christ about to encounter the rage of God,” Derrickson said.

“God allows suffering for reasons we cannot understand, but God himself has endured more suffering than we ever have,” Derrickson said.

Derrickson said he believes God is not immune to suffering –– he has endured the worst of it.

“Christ, in his moment on the cross where he endured the ultimate horror, gives us God’s mindset,” Derrickson said. “He is not detached from suffering.”
Martyrs suffer for Christ
Derrickson also briefly discussed some prominent martyrs and the suffering they endured in the name of Christ. He described Blandina, a female martyr in 177 AD who was tortured in front of her children. He also presented the gruesome martyrs of John Huss, who was burned at the stake in 1415, and St. Plato who had red hot cannon balls placed upon his skin in 266.

Biola students resonated with Derrickson’s examples, and found his views interesting and thought-provoking.

Derrickson ended chapel by asking attendees to ponder God as an ultimate storyteller, noting that the story is miles better if humans have free will to choose between God and a life of sin.

“It’s a story of creation and redemption, and it is a good one,” Derrickson said.