Sam Suksiri, a Biola sophomore, recently won $10,000 with the help of culinary skills and a video camera. 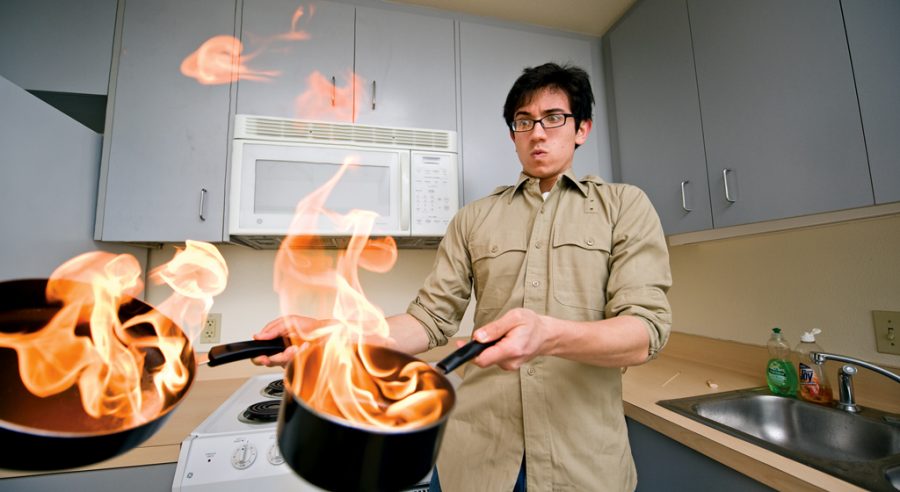 Sophomore Sam Suksiri lit up the “Shine at Dinnertime” online competition with his pulled pork recipe, winning $10,000 through the Food Network. The cooking challenge rules were to create a dish using Worcestershire sauce and to make a cooking segment video. Suksiri was one of six finalists to win the prize money. | Mike Villa/THE CHIMES

As a result of their first entry, Suksiri and Von Konsky received an e-mail in October 2010 about the Lea and Perrins Worcestershire sauce “Shine at Dinnertime” video recipe challenge.
How-to video had set of requirements
The gist of the contest was to make a how-to video of a recipe, using original Lea and Perrins Worcestershire sauce, listing all the ingredients, the steps and then presenting the final dish.

According to the online news source, “The Street,” Food Network host Claire Robinson describes the “Shine at Dinnertime” challenge as the perfect opportunity to experiment in the kitchen with flavorful ingredients and new taste combinations, while also having some fun creating your very own cooking segment.
Behind the scenes of filming
“We didn’t want to put any money into it, and this one was free to enter,” Suksiri said.
In November, with 10 days left until the submission deadline, the roommates agreed to shoot the video. Suksiri had planned out the script and created the recipe for the “Shake It Up” pulled pork sandwiches, using ideas from YouTube.

Suksiri e-mailed the recipe to his mom, “to make sure it was edible.” He got the idea for the dish from watching Robert Rodriguez’s “Once Upon A Time in Mexico” on YouTube.
“As a YouTube addict, I had watched countless ‘Good Eats’ episodes, so what I did was just an imitation of Alton Brown,” Suksiri said.
On campus club assists Suksiri
Sophomore Megan Moghtaderi, president and founder of Mixing Bowl, Biola’s culinary club, also played a role in the making of the video. Moghtaderi loaned out all the equipment seen in the video, which was shot in Hope Hall’s kitchen.

Once the film was completed, the roommate duo was entered into the contest. A Food Network panel selected their video as one of the top six finalists, and their videos went live for voting from the public.
Voting period ends inconclusively
“It was about a 10-day voting period, and by about the fourth day, our video had 1,000 votes on it,” Suksiri said. “But then, in a day, one girl went from a couple hundred to 17,000.”

This particular contestant always seemed to stay in the lead. Suksiri, however, started to see a trend. Each person had a day when their votes shot up, and not just by a couple hundred, but by seemingly impossible numbers — tens of thousands.

Suksiri and the other contestants discovered that the website’s security was malfunctioning. He sent an e-mail to notify the Lea & Perrin’s public relations representative, and then the end of the voting period came, with no immediately known winner.
Contest news arrives
By the time Christmas rolled around, the winner had not yet been announced. Everyone began to get anxious as weeks passed and no news came of the winner.

“On New Year’s Eve, I got up and my dad said something had come in the mail for me,” said Suksiri. “He had a big Super Express envelope with my name on it.”

In the envelope was a letter and a check. Suksiri had won $10,000. However, he was not the only finalist who won — each of the six finalists were awarded the grand prize.

He and Von Konsky split the prize, and Suksiri is looking to take a trip to Cambridge with his $5,000.

Also as part of the prize as a finalist, Suksiri will have the opportunity to travel to New York for an all-expense paid trip to meet celebrity chef Claire Robinson, the host of “5 Ingredient Fix” and the “Food Network Challenge” as well as the other five finalists.

“We’ll all be sitting around the table wondering who really won,” said Suksiri.