Biola students are not strangers to accidents at the La Mirada Boulevard and Oakwood Lane intersection. 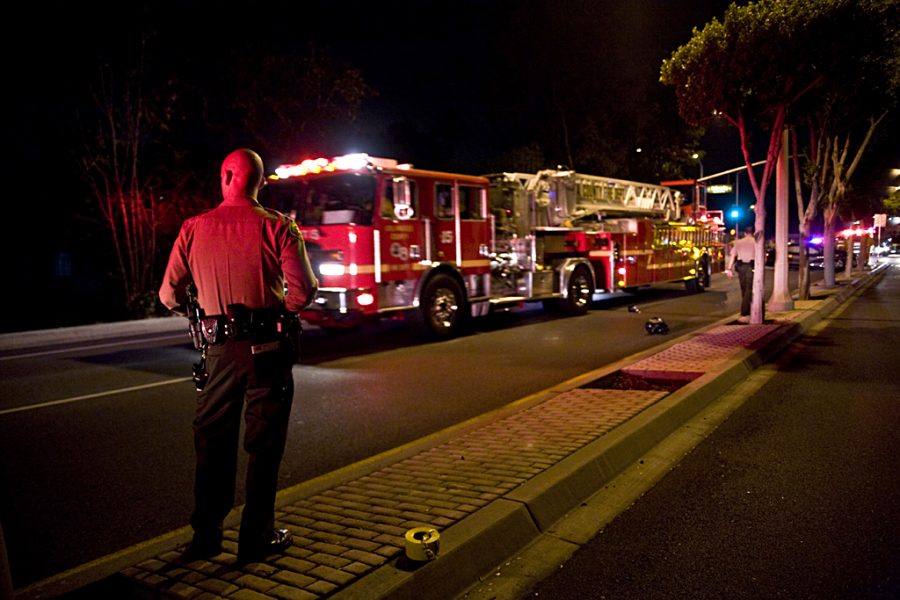 A La Mirada officer stands by on the scene of a car crash on the corner of La Mirada Blvd and Oakwood Lane Tuesday night. City firefighters, police, and campus safety were involved in the scene. No Biola students were confirmed to be involved. Photo by Kelsey Heng

Heavy traffic at the intersection of Oakwood Lane and La Mirada Boulevard has created problems at the north Biola University entrance gate and put students at risk.
This particular intersection has recently gained attention due to several accidents that have occurred there within the past year. The most recent occurred on Oct. 27, and involved a sergeant from the Los Angeles County Sheriff’s Department.

“I’ve always lived on upper campus, so I’ve been able to see or hear plenty of accidents,” said junior Kelsea Yates. “I know that quite a few accidents have happened at that intersection.”

A history of accidents

Within the past year, there have been seven collisions that have occurred at the Oakwood intersection. According to the Norwalk Traffic Division, two of the accidents have resulted in injuries, and three of the accidents have been rear-end collisions. This year specifically, junior Danica Kushner was hit by a driver while riding her bike across the Oakwood and La Mirada intersection.

Because the smaller Oakwood intersection is located between two major lights the north intersection on Imperial Highway and the south intersection on Rosecrans Avenue there is always a streaming flow of traffic on the La Mirada Boulevard. This heavy flow may be one of the reasons for the accidents, according to Justin Shelby, public information officer for Campus Safety.

Biola students said traffic on the northern side of campus is prevalent because vehicles are frequently entering and exiting the north gate from La Mirada and said that the traffic increases especially during athletic games or when there are visitors on campus. Some students suggested that Campus Safety regulate traffic during athletic games to relieve some of the stress and confusion. Most students expressed concern over the danger of the blind right-hand turn when leaving Biola onto La Mirada Avenue.

“Anytime you have a lot of cars, there is a higher chance of an accident,” Yates said. “But I know when you’re turning out of Biola going on to La Mirada [Avenue], that is really a blind corner and you can’t see if cars are coming.”

Several Biola students stated that putting in a protected turn at the intersection could possibly help reduce the risk of an accident. Yates said many people entering campus from La Mirada Avenue are also at risk because oncoming cars may be traveling faster than they think and, in the end, the cars could collide.

Senior Sarah Brown said she knew two people who had been in car accidents at that light, and that a protected turn at the intersection could help alleviate the danger.

“I think a lot of times Biola students take extreme risks turning into Biola from La Mirada [Avenue],” Brown said. “I think it’d be beneficial to put an arrow at that light.”

Although Shelby agreed with the fact that upper campus was frequented by more traffic, he said that putting in a protected turn would not automatically solve the problem of reoccurring accidents. Shelby, who was a Biola student from 2001 to 2005 and who has been working at Campus Safety since 2005, said that since he has been a student, the city has made changes to the Oakwood intersection, but he still has heard about numerous accidents at the light.

Students said that being cautious and educated can help decrease the number of accidents. Senior Torie Fields said she was unaware of the number of collisions that had occurred at the Oakwood light and said she thought that if students were more educated about that issue, they, in turn, would become more cautious. Brown also echoed the sentiment that the bottom line is that students should proceed with caution when entering or leaving the Biola campus.

“I don’t know why there are so many accidents,” Shelby said. “But certainly, we see that they are occurring, so we need to be more careful. Students need to realize that it is an unprotected turn and need to make sure they have plenty of time to cross the intersection. It comes down to being aware of what vehicles around you are doing.”