Biola is nearing its city-mandated enrollment cap for its La Mirada campus. 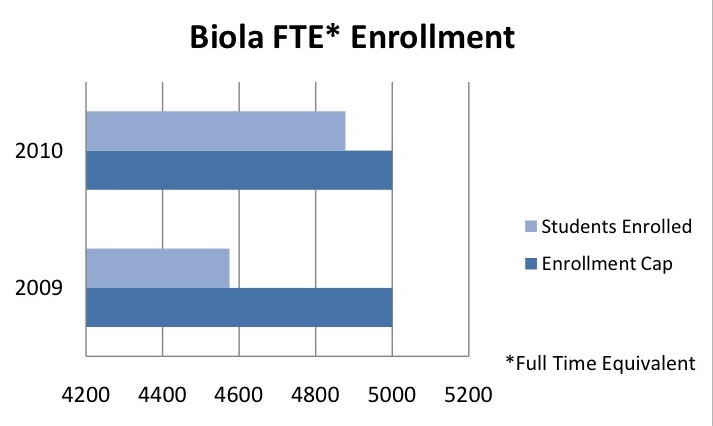 “There are procedures for increasing that [FTE] limit, and we are now considering whether we want to apply for an increase,” said Ken Bascom, senior director of facilities planning.

This fall, 3,907 undergraduates are attending Biola along with 1,239 total graduate students. According to Biola Institutional Research, this year’s incoming class marks the school’s largest incoming class ever, with 909 freshmen, 328 transfers and 56 reapplications, while a total of 2,614 continuing students are currently attending Biola.

With enrollment numbers so high, Biola is well on its way to growing beyond the set cap on full-time students allowed on campus. According to Bascom, that cap includes “full-time equivalent” students physically attending the 95-acre campus, although there is no limit on the number of students Biola can enroll worldwide. There are 6,123 Biola students worldwide this fall.

“The cap is in place so that we can maximize our space without compromising the educational enterprise,” said André Stephens, senior director of undergraduate Admissions. “Biola will continue to work with city officials to determine the number of students we can enroll given the size of our current facilities and parking. Our growth up to this point is under the cap that has been set.”

Biola set the cap in the late 1990s when enrollment was about 3,200, Bascom said. It allowed city experts to create an Environmental Impact Report, which the State of California requires. The enrollment cap became law in a city ordinance in March 2005. The ordinance was part of a master plan developed by Biola.

“When the City Council approved our master plan, that approval was done in the form of a La Mirada city zoning ordinance,” Bascom said. “They classify our campus as a ‘Planned Unit Development.’ The standard procedure for any PUD in the city is that the development plan, or master plan, becomes a city ordinance.”

Sophomore Stephanie McEachen said she thinks Biola should be allowed to grow beyond the cap.

“But that means that the campus needs more space to put those students,” McEachen said.

Bacom said the cap on enrollment does not affect the physical growth of the Biola campus.

“Biola has several hundred thousand square feet of buildings that it can build without any problem,” Bascom said. “These have already been approved by the city; they are just awaiting donor funds. These include Talbot West, the Center for Science and Health, and the Center for the Arts. These three buildings would add about 250,000 square feet to the instructional space on campus; that is equivalent to more than eight Sutherland Halls.”
Bascom said that Biola has permission to build several more buildings beyond the ones he listed. In reaching its enrollment limit, Biola would still be able to expand in building square footage.

“We have a total of nearly 400,000 [sq. ft.] of future building space that we are approved to build under our current plan,” Bascom said. “Most of this space is entirely new buildings rather than remodeling of old buildings.”

Despite the cap on enrollment, Admissions will continue to recruit new students, Stephens said. Ongoing efforts include Admissions staff recruiting locally and out of state, campus preview events and tours, student ambassador blogs, the Biola Ethnic Advancement Team visiting local churches and schools, and using Facebook as well as other online marketing efforts.

“I can’t say that there is ‘one’ thing that we are doing differently that has made the difference for students choosing to attend Biola,” Stephens said. “However, I do think some of our social networking marketing efforts (specifically on Facebook) has helped, as well as the effort we made to pursue students who fit the Biola profile who initially did not respond to our letters. Biola’s reputation in the marketplace as a strong, Christian university with stellar academics resonates with students and families as well.”

Freshman Andrew Cleary said his positive experience with Admissions was part of his decision to attend Biola.

“Admissions was great,” Cleary said. “My counselor did a great job of checking up on me and was genuinely interested in what I was doing.”

“I love this campus,” Sinner said. “I love how everybody comes from different backgrounds of church and can talk about it in a mature manner, and I’ve never been so involved with people just caring about you.”

Stephens also acknowledged the role of a positive community in bringing students to Biola.

“We know that Biola is successful not because of the work that we do, but because of the work of the entire campus community making it a place where students desire to come,” Stephens said. “Obviously, God is the one who directs our paths, so we trust that He is bringing in the increase.”