Although the Jesus mural will be staying, Biola will still be adjusting to changes as the university pursues efforts toward diversity. 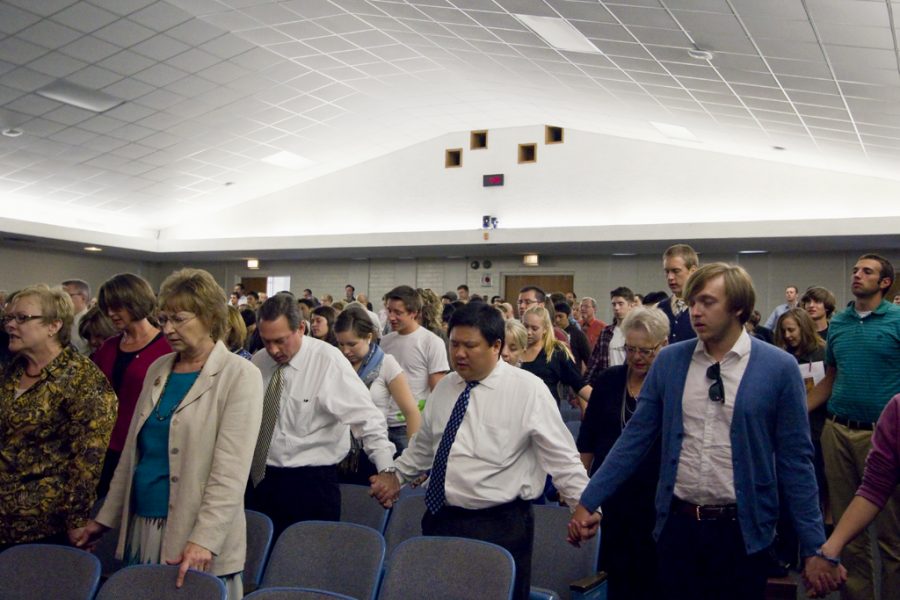 The Biola community takes a moment to pray the Lord’s Prayer as a sign of togetherness after hearing President Barry Corey’s announcement about the Jesus mural. Corey decided that the mural will stay a part of Biola’s campus in addition to the continuation of racial sensitivity discussions. Job Ang/ The Chimes

Last week marked President Barry Corey’s long-anticipated announcement of the fate of the Jesus mural. After two years of official discussions and many years of debate, “The Word” will officially be restored and continue to preside over Biola’s campus.

Though a high-profile item on the agenda, the announcement about the Jesus mural was only a small part of the decisions presented in the speech. Corey outlined several dimensions for the university’s future, including a renewed and heightened commitment to biblical diversity expressed on campus in “visible and concrete” ways. Specific proposals include building a cultural center, a campus-wide celebration of the arts in 2011-2012, and a restructuring of the office of diversity’s leadership. He also called Biola to return to its historical roots and biblical mission to the city of Los Angeles.

These are concrete decisions that show Corey is ready to move beyond talking and lead Biola into action. A task force is being assembled this fall to research a topic for a new mural he has commissioned on campus, with work beginning in 2011. Also, his “return to the city” initiatives are scheduled to be discussed this winter.

It may be tempting to believe that with the mural decision, the debate is over, but changes and growing pains are still on the horizon for Biola. Will the new mural have its own controversy? Or will the task force choose a safe subject, skirting the issue? How will the community respond to the questions being raised about ethnic diversity and the role of art on a Christian campus? This is not the end, but in fact, only the beginning.

The central issue––racial tension–– has not been solved by Corey’s decision or by his detailed proposals. In fact, we anticipate more tension will be placed on this tender area for Biola’s community.

Now more than ever, Biola has to determine where its priorities will lie. In commissioning new art and exploring other areas of creativity, we cannot forget what initiated these discussions. If pain in the community is where this conversation began, then healing in the community should be the focus for the future.

Efforts from Metzger to create a campus culture that loves diversity and art are noble. But, perhaps it is not through spending more money or by creating new programs that reconciliation will be accomplished. Perhaps unifying Biola does not start with a second mural, or even a cultural center. It starts with each and every undergraduate and graduate student, and every faculty and staff member reaching out in Christ’s love and friendship to people of strikingly different looks and backgrounds. To love people, we need to understand them, and to do that we need to get to know them.

Maybe that means going home with a friend from the inner city to see what life is like for him. Maybe that means devoting 30 minutes a week to befriending an international student and helping her with English. Maybe that means the attending meetings of one of the handful of ethnic clubs on campus. Whatever the steps we take, the Biola community needs to remain just that–– a single community, diverse and multicultural, but united in the same Christlike love for God and one another. Transformation can infect the whole, but it begins at the individual level.

Corey has made it clear that the conversation is far from over. At some point, merely talking about tensions becomes futile. We must move on— not by discussing less, but by acting more. Rather than celebrating the mural’s renovation or lamenting it, we need to walk in each other’s shoes. Looking beyond oneself to our neighbor is not just a component of reconciliation— it is at the heart of what it means to be a Christ-follower.

Let this be the day that we begin to move on towards healing. We exhort the entire Biola community— not just the administration— to step outside their comfort zones. As we watch the Jesus mural being restored, let us mirror that revival in our hearts and community. May “The Word” once again be a testimony to the vibrancy of life at Biola.