The Biola women's soccer team tied San Diego Christian 1-1 on Saturday. On Tuesday, they followed this with a win against No. 4 Cal Baptist, 2-1. 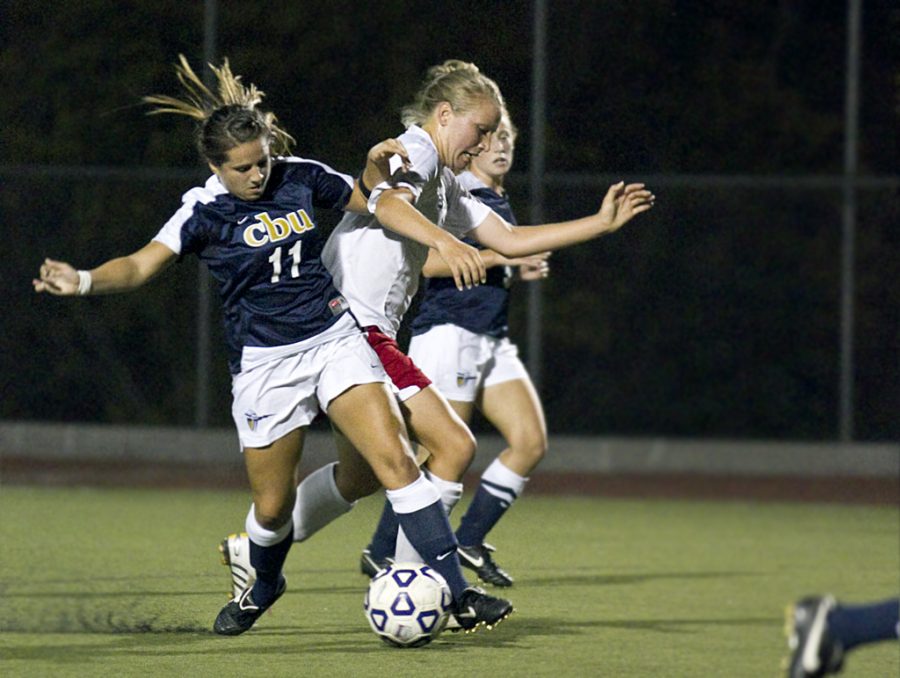 Sophomore Taylor Lundquist forces her way through the California Baptist defense. Lundquist scored from 20 yards out to give the Eagles a 2-1 win in overtime over No. 4 Cal Baptist. Mike Villa/ The Chimes

The girls tied their first conference game Saturday against San Diego Christian College with a score of 1-1. Freshman forward Allexa Mendoza scored Biola’s first and only goal in the first nine minutes of the game. It was Mendoza’s second goal of the season. Junior Erin Frushon, the Eagles’ goalie, saved a total of eight balls.

Only one San Diego shot got through, in the 33rd minute. Sarah Le scored the goal. The two teams were tied for the rest of the game and for the duration of both overtimes.

However, Tuesday the girls won their first conference home game, shocking No. 4 California Baptist University. There was a good turnout, and the crowd was enthusiastic. There were no goals until the second half of the game when CBU kicked the ball and found the net. CBU came very close to getting a two-goal lead, but Biola defended and regained possession. Frushon made an admirable save tipping the ball over the crossbar in the 76th minute.

Three minutes later, freshman Victoria Dalla Zanna scored the first goal for Biola, and the teams were tied until the clock ran out. The game went into overtime, but, within the first minute, Biola sophomore Taylor Lundquist took a shot from 20 yards out. The ball flew above CBU’s goalie and into the goal, and the game was over. The final score was 2-1.

“Overall I am very proud of the girls for picking up this win,” coach Todd Elkins said.

“Cal Baptist is such a strong team and they do a lot of things well. I was impressed with the way our team hung in especially after giving up the early goal. We fought off their efforts to go up two and got a big goal to force overtime.” It was Biola’s first win over Cal Baptist since 2004, making this a major accomplishment for the women.

This soccer season, the team has welcomed on board 10 freshmen players. Even with this new dynamic, the team is playing well as evidenced by their performance in the last two games. The freshmen players are gaining more experience. At the core of the team are six seniors. Elkins described them as the identity of the team.

“[The seniors are] amazing…” Freshman forward Jessica Austin said after the game. “I’m going to try my hardest to make their last season the best for them.”

Elkins’s goal for his team this year is to make conference playoffs. To accomplish this, his team will need to win at least five of the 10 conference games. However, the immediate goal of the team is to keep improving. Being too competitive can take the focus off of playing well. Elkins wants the girls to be unified and to continue to represent Biola. He hopes that as the team continues to work together, winning will be a natural result of their improvements.