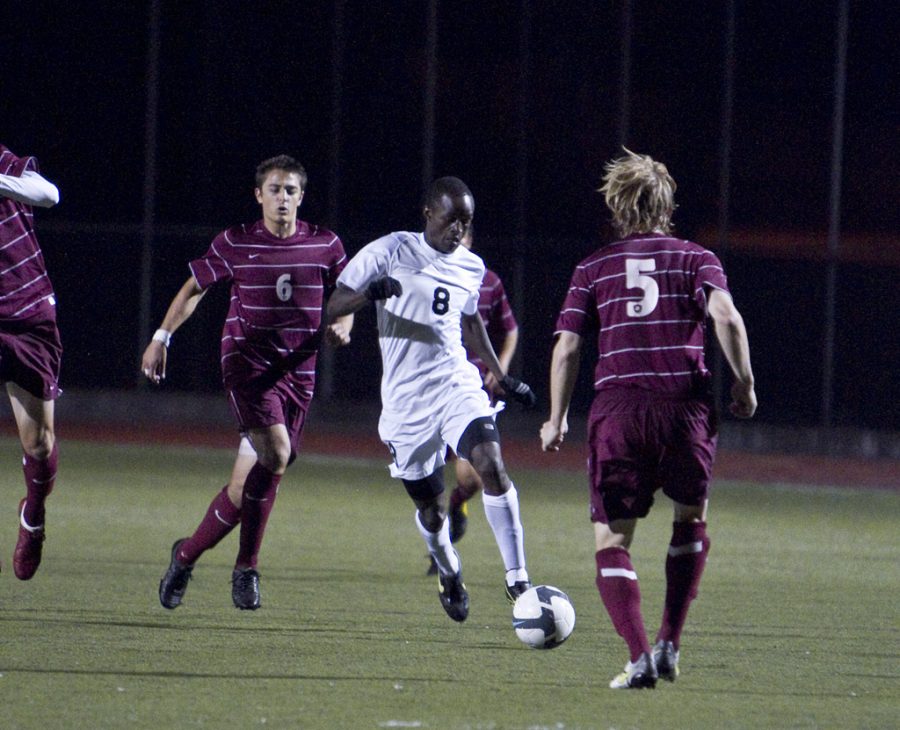 The season was off to a rocky start–– the Eagles’ offense struggled to gain momentum and only scored in a couple of matches. However, a tie against Cal State San Marcos turned it around. Biola was ready to start conference play after defeating Marymount College 3-0 in their last non-conference game of the season.

The Biola offense showed up early and often, scoring three goals in each half. After a few attempts on the San Diego goal and a save by Biola junior goalkeeper Aaron Fenlason, Biola senior Phillip Friehe scored with a head shot in the minute 15.

In the 22nd minute, Biola senior Kennedy Chongo went for a header that hit the post. Almost two minutes later, a red card was called on San Diego’s Salvador Velazquez, giving Biola a one-man advantage for the rest of the game. After another save by Fenlason, Biola played the ball down field. Recovering a deflection, Biola freshman Dylan Wingrove gained possession and sent the ball into the net in the 27th minute, scoring his second goal of the season. Fresh off the bench, Eagle senior Mike Teague received a pass from junior Zach Bautista and put Biola up 3-0 in the 32nd minute. Before halftime, Biola made two more presses. One went high, and the other gave San Diego keeper Cameron Riley his only save of the game.

Just five minutes into the second half, freshman Daniel Chew took a shot, but it was stopped. In response, San Diego took control and tried to score. However, Fenlason stood up against the contest and made his third save of the night. In the 58th minute, Wingrove banked off a mistake by the San Diego keeper, chipping the ball over Riley for his second goal of the match. Biola junior Marco Ruvalcaba found the net in the 64th minute to give Biola a 5-0 lead.

Out of chances, San Diego sent in Christopher Cozzi to replace Riley at goal. Immediately, Cozzi was ready for the Biola onslaught, making a save against Bautista’s shot in the 65th minute. But it didn’t take long for Chongo to capitalize on a rebound that left Cozzi unprepared. Chongo’s goal gave Bautista his third assist and was the only shot that Cozzi let by. San Diego made a few more tries to get on the board, but couldn’t put shots on goal. Relentlessly attacking, the Eagles also tried to add to their score. But, Cozzi upped his game and finished the night with six saves. By the end of the match, Biola took 23 shots to San Diego’s seven.