Temperatures climbed as high as 113 degrees in downtown Los Angeles Monday and only slightly lower on Biola's campus. 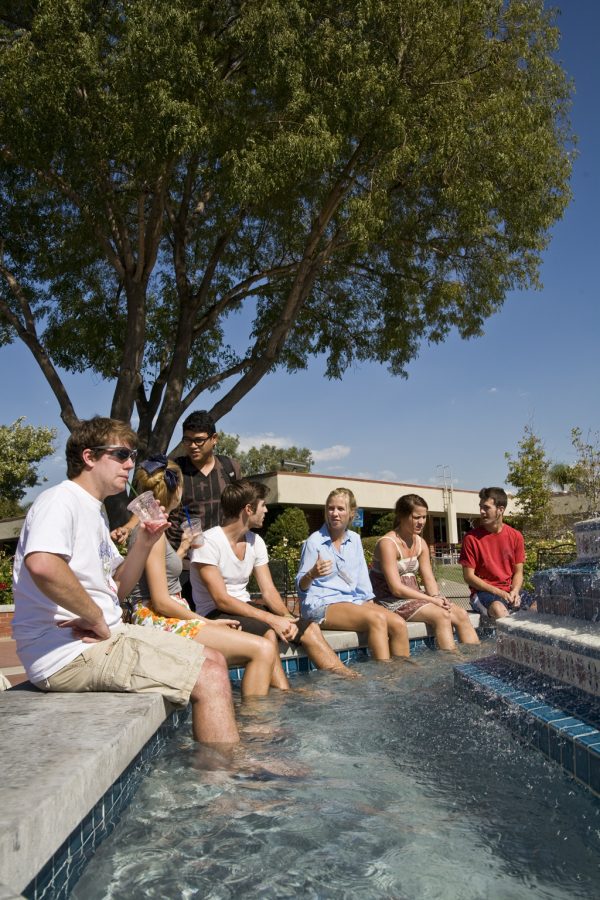 Biola students found ways to cope with the hot temperatures on Monday afternoon. Los Angeles experienced a new record high of 113 degrees, the hottest since record began in 1877. Kelsey Heng/ The Chimes

Despite record high temperatures in the Los Angeles area this week, Biola students say the generally good weather of Southern California remains an attractive feature of the campus.

“It’s amazing,” senior April Gregory said. “I didn’t realize how perfect it’d be [until I got here].”

While Facebook statuses and local news outlets reported Monday’s record high temperatures, Newsweek recently named Biola one of the top “25 Great Schools With Great Weather.” Ranked at 23, Biola is one of three Christian colleges on Newsweek’s list, along with Westmont College and Pepperdine University. Several of the schools listed are in California, including Stanford University, UC Berkeley, UC Los Angeles, UC San Diego and Chapman University. Arizona State University came in at number one.

“I would agree with that assessment,” senior Hannah Tyer said of Newsweek’s decision to highlight Biola’s “perfect” weather. “We have very few bad days. It’s an appealing part of Biola. But I’m biased. I like the heat.”

According to Newsweek, Biola has an average temperature of 63 degrees, with an average of 186 sunny days and only 35 rainy days per year.

Monday was not so pleasant when temperatures hit a record high of 112 degrees in La Mirada, according to Weather Underground. At 113 degrees at 12:15 p.m., Downtown Los Angeles melted in the hottest temperatures since the National Weather Service began keeping records in 1877. The new record was one degree above the previous record of 112 degrees, recorded on June 26, 1990.

“Yes, I’d say Biola has good weather on any other day but today,” sophomore Francis Jones said while sitting near Fluor Fountain on Monday. “Today is one of those days when you stay inside. But generally, I don’t have to worry about snow or rain. I don’t recall it ever raining to the point where we weren’t able to go to class. And it’s nice to sit out and feel the breeze.”

The second floor of Sutherland perhaps took the heat the hardest. Facilities Services was already aware of air conditioning failures there, but [Monday’s] temperatures made the failures even clearer, said Chris Reyes, manager of environmental systems. Overall, however, Reyes was pleased with how the systems held up in the heat.

“We did not have any problems meeting the demand of the campus,” he said. “It was really to its max, but we were able to hold it.”

The systems in place at Biola and La Mirada as a whole are not designed to handle heat that extreme, he explained. But it isn’t economical to purchase massive fail-safe systems to meet once-in-a-century demands, Reyes said.

“We had angels around our equipment,” he added.

“It was hot, stupid hot,” freshman DJ Schwab said. “I had baseball practice outside and half the guys on the team almost passed out from dehydration.”

Other students, like freshman Lety Trujillo, said they enjoy the heat. Trujillo said the heat still kept her indoors Monday, however.

“I made sure I brought a water bottle to stay hydrated,” Trujillo said. “I stayed indoors to study and drank water the whole day.”

According to the Student Health Center, Trujillo had the right idea.

“In general, students should stay in an airconditioned room when temps are 111,” Kristin Phelps, director at the Student Health Center, said. “Or stay in a room with window blinds pulled with portable fans going. If outside stay cool by sitting, working, eating and taking a break in the shade during the hottest hours of the day.”

“Drink plenty of fluids like water, gatorade, or a drink with electrolytes,” Phelps said. “One can also suck on ice chips.”

Phelps also gave advice for athletes and those with respiratory problems on warm days.
“If it is hot and the air quality is bad those students with heart disease, asthma or other respiratory disease should minimize outdoor activities and stay in an air conditioned room if possible,” Phelps said. “It is advised that students with respiratory disease or heart disease should not participate in P.E. or outdoor physical activity and should stay indoors as much as possible.”