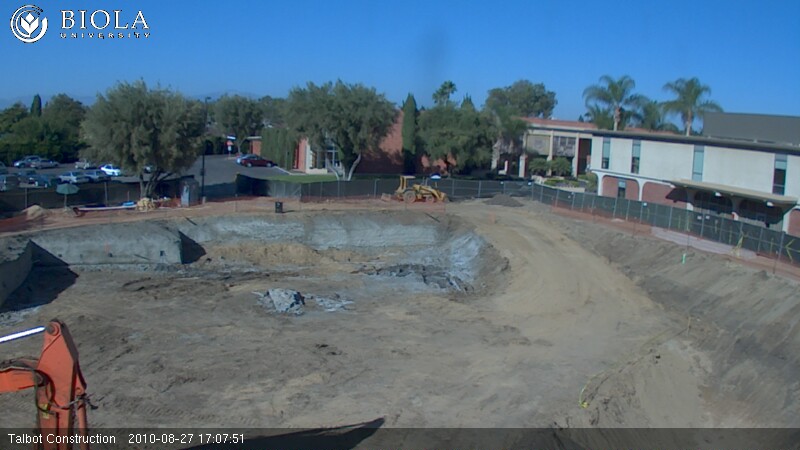 Construction continues on the East Talbot building which is expected to open later this month.

Green will once again cover the bare dirt of Metzger Lawn this week. According to facilities officials, the lawn will be re-sod and open later that week along with the section of sidewalk that is currently blocked off in front of the library. Meanwhile, construction continues on other parts of campus including the Fitness Center and the East Talbot building, and plans are in development for a new parking garage.

Construction Back on Track:

Construction fell behind during the summer due to delays with permits and a late shipment of supplies, but Biola plans to have the East Talbot building ready in time for Fall 2011 classes, said Ken Bascom, senior director of Facilities Planning. If all goes according to plan, the Fitness Center expansion will finish by September 7.

Bascom said future plans may include a Health and Science building and a Center for the Arts building to replace the current McNally buildings. For now, however, the Talbot buildings and the parking garage remain the school’s main priorities.

A five level structure, the parking garage would hold about 640 parking spaces and would be located between the baseball field and the pool.

“That could be ready in October of next year,” Bascom said, but stressed that the garage has yet to be fully approved by the President’s Council and the Board of Trustees.

Bascom said the parking this year will likely be the worst in six years. The parking structure under the track and soccer field has already been 100 percent full several times since school began.

“I park on the street on Biola Avenue,” said sophomore commuter Amanda Sansonetti. “It’s a hassle trying to look for parking. And with the freshman class being the largest, we maybe need a new garage. If half the freshmen have cars, the demand is going to increase.”

Workers continue preparations for the nearby Talbot building, with several weeks left before they can lay foundations. The building will house faculty from the Biblical Studies and Theology departments, Biola’s Philosophy of Religion program and all faculty who teach undergraduate Bible classes. Once construction is completed, workers will begin the second phase of the project, which consists of remodeling Feinberg Hall beneath Calvary Chapel and demolishing Myers Hall to make room for the new West Talbot building. The entire building project is estimated to cost $55.4 million, with funding coming from donations and fundraising efforts.

Bascom said 80-90 percent of the $18 million needed to build the East Talbot building has been raised. The construction contract receives $11 million, while $2.2 million goes toward design and permits. Another $2 million pays for furnishings, equipment and other odds and ends. Bascom said an endowment fund has also been raised for any surprise operating costs.

Construction also continues on the remodeling of the Fitness Center. The expanded workout area will allow for an added row of equipment. The remodeled gym will also include a new facility to be finished in the coming months for the athletic training staff.

According to Bascom, a shipment of supplies that arrived a month late made Facilities Planning prioritize what it needed to finish first. That meant getting the expanded offices and classrooms ready for the fall semester before finishing the Fitness Center.

“We had some crews working seven days a week to get this done,” Bascom said.

The gym has grown by 30 percent, according to Bascom. Four additions to the gym have been made and offices have been rebuilt. The size of the wrestling and weight rooms have increased and all of the coaches’ offices were remodeled to be slightly larger

The entire remodel of the gym cost $1.3 million, which was paid for by unused emergency funds and by Auxiliary Services fees. Bascom said funds for academic buildings like the East Talbot building come from fundraising, while funds for services that directly affect and serve students come from student-generated income.

“We’re very excited about the changes, very thankful for what’s happened on this end of the campus and how it’ll affect the campus,” said athletic director Dave Holmquist.

DBC Comments on the Changes:

“The projects are a sign of a growing, strengthening campus,” said Biola president Barry Corey. “We’re not a great school because we have great buildings, but the strength at Biola is fortified by the fact that we have quality places for students to study and for faculty to serve.”