Speakers challenged students to commit to a united campus at Friday’s chapel, which ended the week-long “Picture This: Love, Justice and Jesus” chapel series. 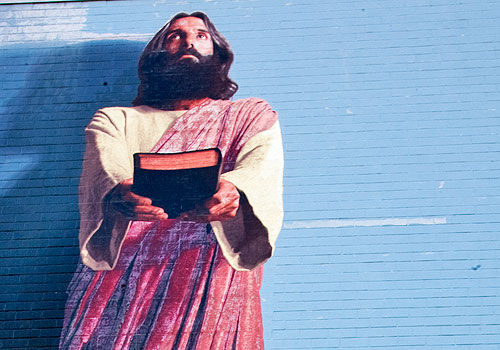 The week of April 19 was dedicated to discussions about the Jesus Mural, which has been the subject of controversy for more than a decade. | LINDSEY MINERVA / The Chimes

Speakers challenged students to commit to a united campus at Friday’s chapel, which ended the week-long “Picture This: Love, Justice and Jesus” chapel series focusing on the Jesus Mural and multicultural awareness.

Earlier chapels featured an interview with Kent Twitchell, the artist who painted the mural, a chapel dedicated to discussing the theological implications of the mural and an interactive chapel that included student testimonies.

Students and faculty took time to respond to the week by writing out their feelings Thursday evening. Friday’s chapel, which began with speakers’ concluding takes on the series, ended with student leaders reading their personal responses to the week’s chapels while copies of student responses written Thursday night showed on screens.

“My prayer is that we’d listen, that we’d join the discussion and recognize the passions of others,” said AS president-elect Lizzie Neely.

Anonymous responses included commitments to embracing others, legitimizing the feelings of minorities and trusting God’s direction.

Some responses were less positive.

“I’m glad that as a campus we could come together through diverse opinions and withstand the issues and deal with it,” freshman Jennifer Loeser said. “But I feel like the chapels weren’t direct enough.”

“I’d appreciate a more direct approach with clear arguments for why we should or shouldn’t keep the mural,” said freshman Audreana Dill.

Other students, like Randa Hinton, said they thought the mural had been taken out of proportion.

“I think some people have a warped view of the mural and some faculty do as well,” said Hinton. “People see that as their Jesus…. We’re kind of idolizing that mural.”

“I just want it to be known that all ethnic students on Biola’s campus don’t have the same view about the Jesus mural and they all don’t feel oppressed by the Jesus mural,” she said.

In facing the future of the mural, students should consider the mural’s historical significance, said Jamie Campbell, a Biola alumna, professor and missionary, at Friday’s chapel. Campbell compared the Jesus Mural to a leftover meal that can still nourish, or an old mirror that a person would respect but not want to put in his room. Some students may not feel connected to the Jesus Mural, but it’s a part of Biola’s history.

Larger issues surround the mural debate, however. Kitty Purgason, associate professor of applied linguistics, said that many students, even those from different “cultures” within the United States, go through periods of feeling isolated and marginalized.

“Whenever we feel that we don’t belong, it’s easier to find things that highlight our feeling of not belonging,” said Pergason.

Brad Chisterson, who spoke at Friday’s chapel, called students to take leadership and bring cultures together.

“There’s a diverse body, but not a diverse leadership,” said Chisterson, who teaches sociology at Biola.

“We have the opportunity to make it work better, to look at the whole,” said Dan Callis, art professor.

Pete Menjares, who moderated Wednesday and Friday’s discussions, said President Corey hopes to make a final decision regarding the Jesus Mural’s fate in the upcoming months.

At the April 15 Town Hall meeting, Corey said his main concerns and hopes for the “Picture This” series revolved around the importance of listening and caring, or engaging in what someone else thinks. He hoped the series would honor Christ and serve as a model for future discussions, although he said he does not expect the Jesus Mural issue will necessitate another chapel series next semester.

Corey said he considered the “Picture This” series a part of a process.

“It’s unhealthy to make a decision without discussion,” Corey said. “This is just one model of having this kind of conversation that’s going to transcend other conversations.”