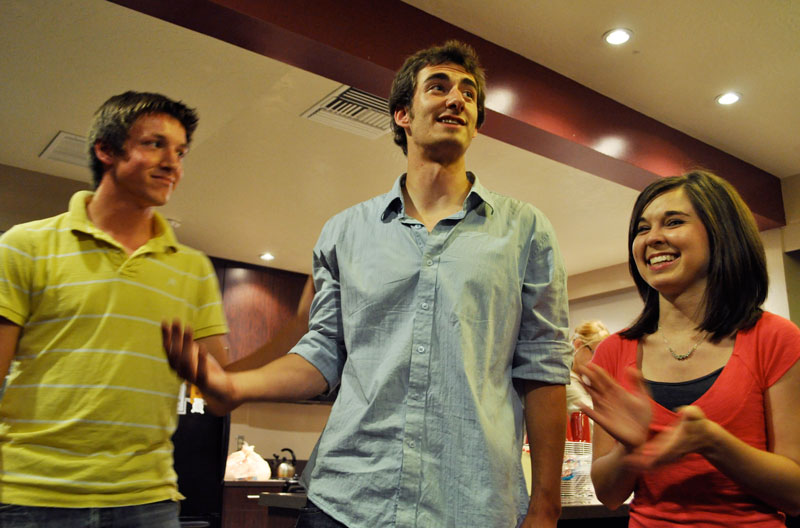 Minutes after 10 p.m., the Stewart Hall lobby erupted with applause and cheers as Neely and Drebinger supporters, all gathered for a victory party, first heard the news. When Mark Heath, current AS president, called Neely and Drebinger, Neely said she was caught slightly off guard.

“The first thing that popped into my head was, ‘Thank you, Jesus!’” Neely exclaimed, face flushed with excitement.

Neely’s victory makes her the first female president since the 1995-1996 academic year, and only the fourth female in Biola’s history.

About 1,200 students voted this week in the AS and SMU elections. Two times as many people voted on Tuesday than Monday, said Cameron Spencer, AS vice president of marketing and communications. These numbers are comparable to last year, when about 1,160 voted.

Payton, who was elected SMU president, follows in the footsteps of his brother Adam, who was SMU president last year. One of the first things he did after hearing of his victory was call his brother. He admitted the past few days have been difficult, but he can take it easy now that it’s over.

“I’m just going to enjoy it,” he told Chimes reporters.

Both Neely and Drebinger said the other had been one of their most indispensable supports throughout the four-month long process that brought them to Tuesday night. And success wouldn’t have been possible without the support of family, friends and even the guys on Drebinger’s floor. But the job has just begun for the presidents-elect and senior vice president-elect.

The next step for Neely and Drebinger is to confirm the next year’s AS staff. While the senate race lacked competition, applications for service chair positions are aplenty, Spencer said. Candidates will be vetted and confirmed by the end of April, he expects.
This election was marked by low competition in the senate races. Stewart was the only dorm that had more than one candidate vying for the senate spot. Sophomore Jordan Brunett won that race by only two votes. After hearing the results, he said he would be spending the night celebrating with Neely and Drebinger. That celebration in Stewart Hall included root beer floats, smiles and excitement all around.

For Neely and Drebinger, the night was a culmination of the past weeks. Neely described the campaign as exciting and the most fun experience of her life, rather than a draining experience.

“It was just inspiring to see so many students I didn’t know supporting me, wearing my shirt … just all the different way God answered prayer requests through the week, it was all exciting,” she said.

Andrew Harmon, the campaign manager for Neely and Drebinger who also headed up Mark Heath’s campaign last year, was impressed by their diligence and drive, not only to win the election, but also to prepare for serving the student body afterward.

“That kind of mentality in the campaign is the heart of two people who don’t just want to be in office; they don’t just want a job,” Harmon said. “They want to actually serve people and make things better. That to me was one of the things that kept me up late into the night painting signs.”

But for one night at least, the presidents-elect could enjoy the sweet taste of their victory.

“Dig in, have fun, let’s celebrate,” Drebinger told the party.